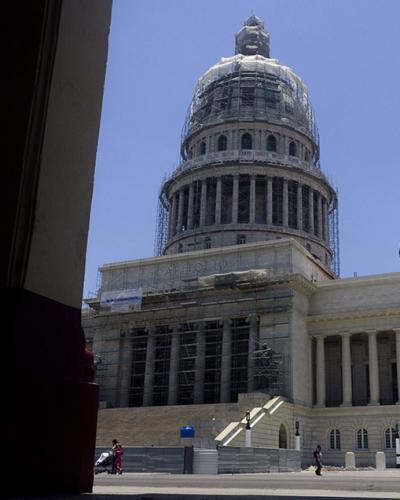 Havana, November 13 (RHC)-- Dr. Eusebio Leal Spengler, the Havana City Historian, told reporters that "Havana has played an important role in the construction of the national character, in the struggles for independence, and in the battles led by students and workers."

Noting that the Cuban capital has "an impressive heritage reserve," Leal spoke at a press conference on Monday to provide details about the plan of activities in recognition of city, which will be marking its half millennium in November next year.

To greet the grand occasion, Leal explained that the finishing touches of the full restoration of El Capitolio building will be accomplished, with the completion of the halls of National Symbols, of the Anthem, and of the Constitution.

Other works include the setting up of the Railway Museum of Cuba at the Cristina Station in Old Havana, the new headquarters of the Automobile Museum; and the recovery of the first venue of the House of Representatives.

The preparation for the 500th anniversary of the Cuban capital will also include the setting up of the stations of a new public bicycle system in the old city, as well as a housing program that will improve living conditions of hundreds of residents.

“Havana is a city that has suffered the impact of cyclones and political-economic changes, but still it is very alive,” said Eusebio Leal, and he added that works will be carried out in its 15 municipalities.

Some of the cultural activities planned for Havana´s 500th anniversary, include the 13th edition of its renowned Biennial along the Malecon sea front drive and the Paseo del Prado, and in buildings and public spaces of the Historic Center.