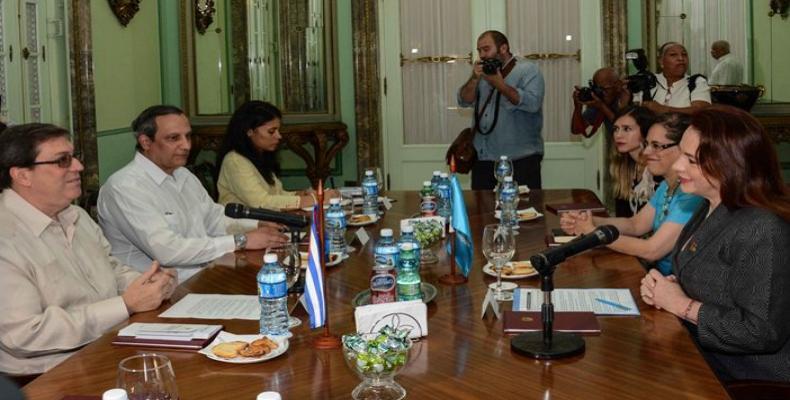 Havana, April 4 (RHC)--  Cubanj Minister of Foreign Affairs, Bruno Rodriguez, met on Thursday with María Fernanda Espinosa, President of the United Nations General Assembly (UNGA) at the Cuban Foreign Ministry.
Ms Espinosa is on an official two'day viosit on the island.
During the encounter, that took place at the Foreign Ministry, both parties expressed their mutual interest in further strengthening cooperation ties.

The visit of the Ecuadorean former foreign minister serves to confirm Cuba's commitment to multilateralism, the defense of peace and the right of individuals and peoples to it, in accordance with the principles of the UN Charter and other expressions such as the Proclamation of Latin America and the Caribbean as a Zone of Peace, said the Cuban diplomat.

Espinosa stressed that his presence on the island is recognition of Cuba's fundamental role in strengthening the multilateral system, the constructive contribution to strengthening decision-making processes of the UNGA, the leadership in the Non-Aligned Movement and the promotion of agendas in diplomacy for peace.

"Cuba is an essential and strategic ally to strengthen the multilateral system in difficult moments that generate a great challenge for the construction of world peace and a more just, equitable and democratic multipolar order", said the  diplomat.

Espinosa described Cuba as one of the outstanding countries in the fulfillment of Agenda 2030 and the Objectives of Sustainable Development and the Cuban top diplomat stressed that the island  will continue to work on cooperation initiatives with the United Nations system in this regard.

Espinosa's agenda in Havana includes meetings with members of civil society, gender specialists, and representatives of the United Nations system and will delive a keynote address to students of the Raúl Roa Higher Institute of International Relations