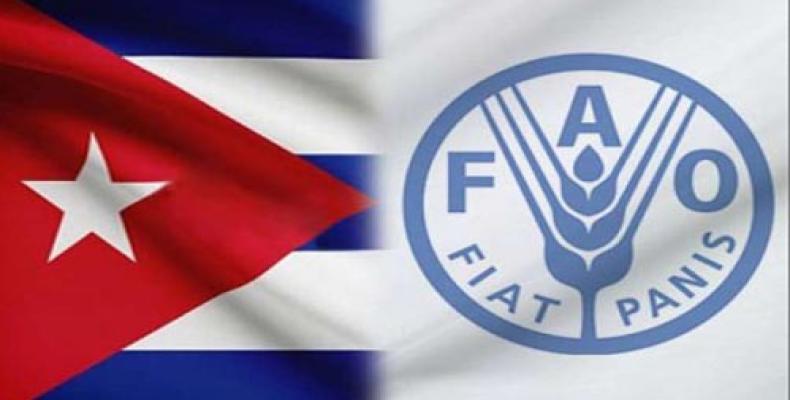 During the meeting, the Cuban representative highlighted the coincidence that exists between the work priorities of the Cuban Government and the strategic objectives of FAO, as well as the firm commitment of the Caribbean state to continue strengthening cooperation with the FAO.

In line with this, Ambassador Rodríguez Ruiz highlighted Cuba’s willingness to continue its cooperation with other countries via FAO programs and projects, through either South-South or triangular cooperation modalities.

"With Cuba's entry as a member of the FAO Council in July 2020, we will strengthen our contribution to the Agency, in order to achieve the Sustainable Development Goals (SDGs)," the Ambassador said.

Regarding the adversities facing the Cuban agricultural sector, the Cuban diplomat denounced that the US blockade constitutes the main obstacle to Cuba’s development.

He referred in particular to the cruel financial persecution and the measures to hamper oil supplies to Cuba, which has a negative impact on efforts by the Cuban Government to strengthen national food production and security.

Rodriguez said the US blockade is also a flagrant and massive violation by a foreign power of Human Rights of the entire Cuban people, while severely violating their right to food.

For his part, FAO Director General Qu Dongyu said that Cuba is not alone and has the strong support of FAO and the international community.

During the meeting, the Director General recalled his visits to Cuba as part of teams of Chinese experts and tours of different scientific institutions in the country. He recalled, in particular, the meetings held with the Leader of the Cuban Revolution, Fidel Castro.

Qu Dongyu, who has been in the position of FAO Director General for only one month, said that one of his first work priorities is to support developing countries through the Hand in Hand Initiative, which includes small island developing states (SIDS) in the first group of beneficiary countries. He was emphatic in pointing out that he was ready to work with Cuba.

As part of Cuba's active actions to guarantee food security and nutrition, and in correspondence with the close ties with FAO, the “Strategic support for sustainable food security in Cuba” (SAS) program will soon be signed with the European Union.

The country's potentials are clearly set up. Cuba has approximately 11 million hectares of arable land. Of these, about 6 million are dedicated mainly to various crops and livestock, while 3.5 million hectares are devoted to forestry development.