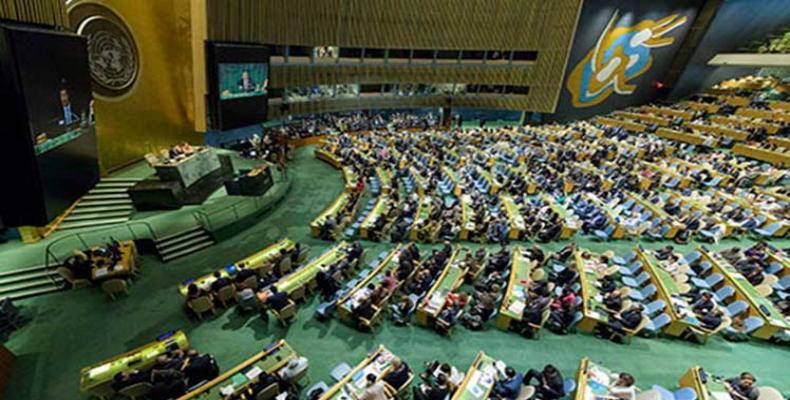 United Nations, September 28 (RHC)—Caribbean Community islands voiced at the UN General assembly on Friday their opposition to the US blockade against Cuba.

Speaking at the high-level segment of the 74th session of the UN General Assembly, Jamaican Prime Minister Andrew Holmes once again reiterated his call to end this economic, commercial and financial siege.

Meanwhile, the Prime Minister of Barbados, Mia Mottley, expressed great pride in 'having Cuba as a very dear friend'.

“Our relationship is based on a historical foundation rooted in solidarity, cooperation and complementarity”, she added.

According to the Prime Minister of St. Kitts and Nevis, Timothy Harris, Cuba has long been a friend of that nation, and they will therefore continue to support the call to end the unilateral action of imposing an economic and financial blockade that causes incalculable suffering to citizens.

The imposition of unilateral coercive measures under the Helms-Burton Act is inconsistent with international law and the U.N. Charter, Rowley said.

The Prime Minister of Antigua and Barbuda, Gaston Alphonso Browne, referring to the sanctions applied to Venezuela, stated that 'they follow the same formula that has destabilized Cuba, depriving that nation of its considerable potential to contribute fully to world progress, peace and security.

My government once again asks the United States to lift the debilitating sanctions against Cuba.

Meanwhile, the Prime Minister of Saint Vincent and the Grenadines, Ralph Gonsalves, affirmed on Venezuela that they are witnesses of an illegal economic blockade, disturbingly similar to that of Cuba, which we annually and overwhelmingly denounce as immoral and anachronistic.

Allen Michael Chastanet, Prime Minister of St. Lucia, stressed solidarity with the people of Cuba and questioned the maintenance of the embargo.

Since 1992, the UN General Assembly has passed 27 resolutions calling on the U.S. government to end, without any conditions, its policy of blockade against Cuba.