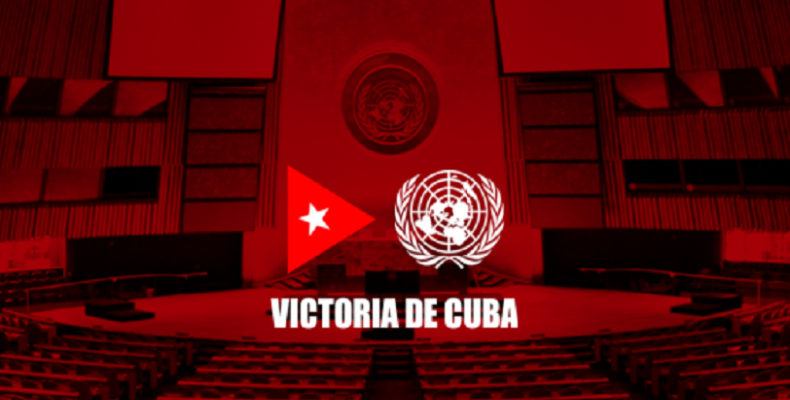 Havana, November 8 (RHC)--Cuba´s overwhelming victory at the UN General Assembly on Thursday with the passing of the resolution demanding the end of the US blockade, has elicited international recognition.

Venezuelan President Nicolás Maduro wrote on Twitter that the free peoples of the world once again rejected the criminal blockade that affects the noble Cuban people, and that the vote was a triumph of dignity and extraordinary moral force.

In Brazil, a nation that voted for the first time against Cuba's claim to eliminate the U.S. siege, former president Dilma Rousseff also congratulated the Cuban people and government for another international victory.

Likewise, Paulo Pimenta, leader of the Workers Party in the Brazilian Chamber of Deputies, described as shameful the vote of Jair Bolsonaro´s government at the United Nations in favor of maintaining the blockade against Cuba.

“We salute Cuba's new victory, number 28 since 1992, in the UN against the economic, commercial and financial blockade unilaterally imposed by the United States in retaliation for its liberation from imperialism. One hundred eighty-seven countries of the world reject this attack against the Cuban people,” he wrote.

Russian news agency Sputnik highlighted the support to Cuba at the United Nations, as well as the speech of its Foreign Minister, Bruno Rodriguez, who expressed that the blockade also violates the human rights and civil liberties of U.S. citizens to whom it unjustly and arbitrarily limits the freedom to travel to Cuba.

Meanwhile, the national coordinator of the Dominican Campaign of Solidarity with Cuba, Roberto Payano, called Cuba's victory over the United States in the United Nations General Assembly a resounding win.

“We are happy with the adoption of this important resolution, above all, because the pressure to prevent it did not work, and we are united in the demand that the blockade against Cuba must cease.”

On the other hand, the former Minister of Culture of Costa Rica, Arnoldo Mora, affirmed that Cuba's victory in the United Nations General Assembly is not only the victory of the Caribbean island but of all free men and women in the world.

The international community once again demanded the end of the blockade against Cuba, a policy that constitutes the main obstacle to the full development of the island´s economy and the life of its people, whose damages amount to 138,8 trillion dollars.