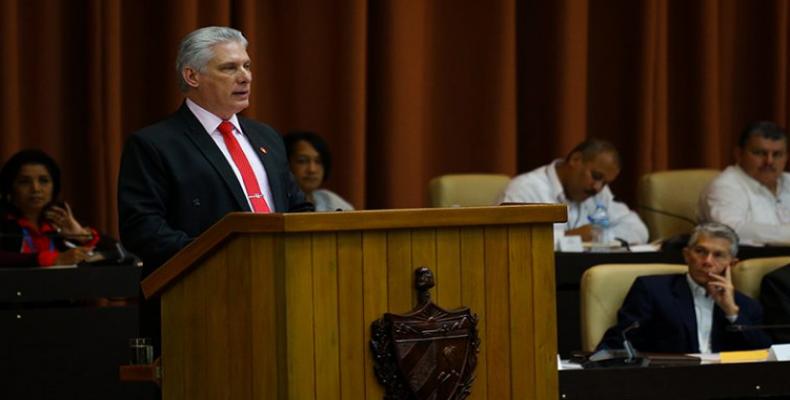 Havana, December 21 (RHC)-- Cuban President Miguel Diaz-Canel blasted the new escalation of the U.S. administration of Donald Trump against the island, especially the smear campaign to try to discredit Cuba’s international health cooperation with other nations and peoples the world over.

Addressing the 4th Period of Sessions of the 9th Legislature of the National Assembly of People’s Power, Diaz-Canel said the new anti-Cuba crusade fully demonstrates Washington’s complete failure in its continued attempts, over nearly 60 years, to destroy the Cuban Revolution.

He emphasized that Cubans will continue firm, resisting U.S. threats and aggression and said Cuba’s revolutionary youth have fully demonstrated its commitment to continue the revolutionary process toward building the prosperous, socialist society our people desire.  “Cuba will never renounce its independence and sovereignty.”

President Diaz-Canel renewed Cuba’s unwavering support for and solidarity with Venezuela, in the midst of Washington’s renewed escalation against the constitutional government, headed by President Nicolas Maduro.  He also expressed support for the new government in Argentina, headed by Alberto Fernandez.

Diaz-Canel renewed also Cuba’s condemnation of the coup against Bolivian president Evo Morales and attempts to destabilize legitimate governments in other regional nations like Nicaragua, Dominica and Suriname.

The Cuban head of state pointed to the failure of the neoliberal models imposed by Washington and some U.S. puppet governments in our region.  He also blasted Washington’s and the OAS’ attempts to distort the reality of Latin America and the Caribbean, especially the root causes of the mass protests in countries like Colombia, Brazil, Chile and Bolivia.

Regarding the damage caused by the U.S. blockade and the latest measures to further tighten the hostile policy, the Cuban head of state pointed to tourism, transportation, energy as the sectors hardest hit.  He thanked foreign investors and firms, which have stood by Cuba despite Washington’s threats and sanctions.