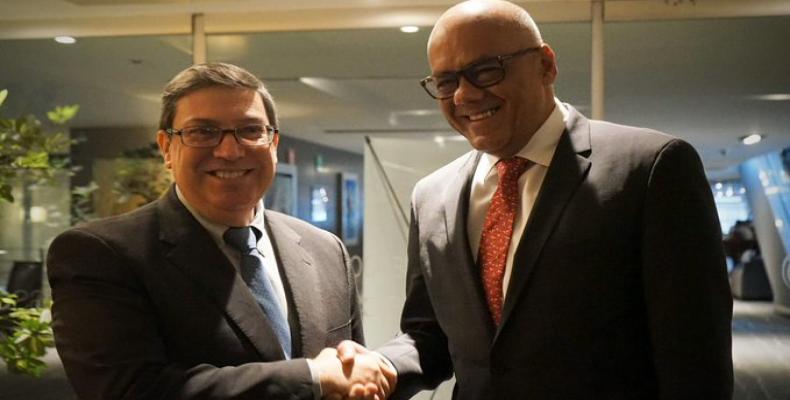 Havana, January 9 (RHC)-- Cuban Foreign Minister Bruno Rodríguez has reiterated Cuba´s support for the government of Venezuela headed by Nicolás Maduro.  Rodriguez made this statement after a meeting with the Vice President of Communications, Tourism and Culture of the South American nation, Jorge Rodriguez.  Both met in the context of the meeting to install the Pro Tempore Presidency of the Community of Latin American and Caribbean States (CELAC) in Mexico City.

During several encounters in Mexico with Latin American leaders, Rodríguez reiterated the hope of restoring unity in the region and revitalizing CELAC -- which he called an indispensable, legitimate, unitary and diverse mechanism for political coordination and integration.

The foreign minister reported on Twitter about other bilateral meetings he held with his counterparts from Panama, Alejandro Ferrer López; from Nicaragua, Denis Moncada; and Gustavo Meza-Cuadra from Peru.  He also met with the Minister of Foreign Affairs of Argentina, Felipe Solá.

CELAC brings together for the first time, under a common purpose, the 33 States of Our America.  On Wednesday, Mexico took over the Pro Tempore Presidency of CELAC, in a ceremony headed by President Andrés Manuel López Obrador.

The meeting took place at the National Palace in the Mexican capital with the presence of officials from member countries of the organization.