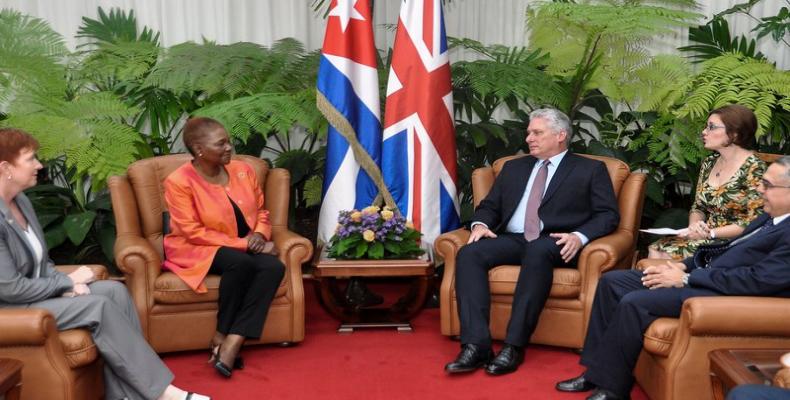 Havana, February 11 (RHC)-- The President of the Republic of Cuba, Miguel Díaz-Canel Bermúdez, received Monday Baroness Valerie Amos, member of the House of Lords of the United Kingdom of Great Britain and Northern Ireland, and Director of the School for Oriental and African Studies of the University of London ( SOAS).

She is in Cuba to attend the Congress "Universidad 2020,"which opened on the eve.

In a cordial atmosphere, they exchanged on the state of the bilateral relations. They recalled the meeting of the Cuban President with members of the British Parliament in November 2018, during a stopover that the President made in London. I

They also expressed their mutual desire to continue developing cooperation in areas of common interest, including culture and education.

Accompanying the distinguished visitor were Jackie Dunne, Vice-Chancellor of the University of Wolverhampton, and Lesley Saunderson, Chargé d'Affaires a.i. of the Embassy of the United Kingdom of Great Britain and Northern Ireland in Cuba.

On the Cuban side, the First Deputy Minister of Foreign Affairs, Marcelino Medina González, and the Director-General of Bilateral Affairs of the Minrex, Emilio Lozada García were present.

Baroness Amos served as United Nations Undersecretary-General for Humanitarian Affairs and Emergency Relief Coordinator from 2010 through 2015 under the UN Secretary-General Ban Ki-moon.