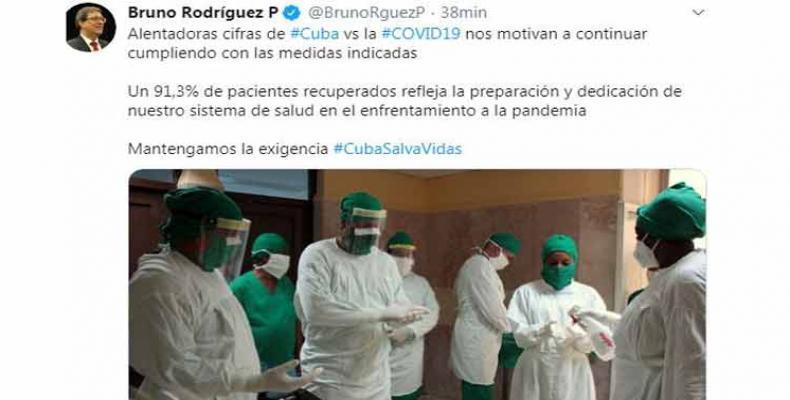 Havana, June 22 (RHC)-- Cuban Foreign Minister Bruno Rodríguez has called for maintaining the health measures in order to continue in the favorable scenario presented by the country before the COVID-19.

On his Twitter account, the foreign minister said that the encouraging figures of these days, in reference to the low number of cases, motivate us to continue complying with the indicated measures.

He noted that 91.3 percent of the patients diagnosed with the disease have recovered, which reflects the preparedness and dedication of the Caribbean nation's health system in the face of the pandemic.

During the day, the Cuban Ministry of Public Health (Minsap) reported no deaths from COVID-19 and only three new cases positive for SARS CoV-2.

According to the daily report presented by the National Director of Epidemiology of the Minsap, Dr. Francisco Durán, 115 people remained in hospital and 114 of them had a stable clinical course.

For three consecutive days the numbers of new diagnoses have been below five, which, according to President Miguel Díaz-Canel, is making a favorable difference.  The president highlighted the decrease in the number of active cases and that for more than 20 days, Cuba has only regretted the loss of two people.

"This gives the idea that "we have the capacity, in a short time, to overcome the situation we have in Havana and Matanzas, and that these provinces can also move on to the recovery stage," he said.