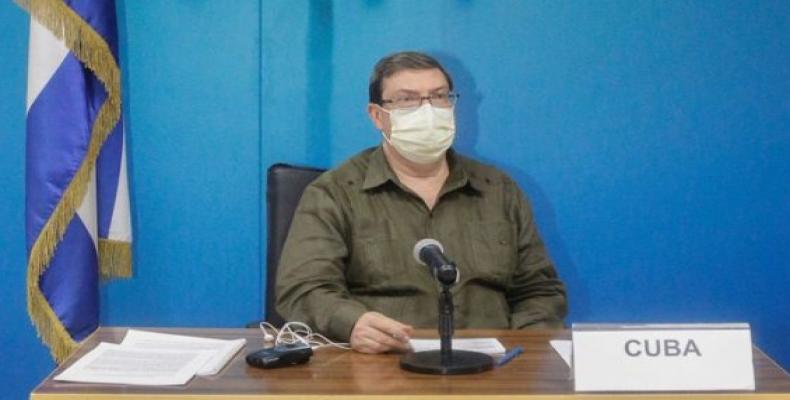 Havana, June 29 (RHC)-- Cuban Minister of Foreign Affairs, Bruno Rodríguez, has insisted on the need to defend the truth and sovereignty of the peoples, at a time when the U.S. government is intensifying its restrictions and defamation campaigns against Latin America and the Caribbean.

During his speech on Monday at the 20th Political Council and 10th Economic Council of the Bolivarian Alliance for the Peoples of America-People's Trade Treaty (ALBA-TCP), Bruno Rodríguez once again advocated for unity of the countries in the region against Washington's capitalist and imperial hegemony, as the only way to face the crisis unleashed by the new coronavirus pandemic.

The head of Cuban diplomacy also reiterated Cuba's willingness to provide advice and contribute to the control of the pandemic, through the work of the medical brigades, as well as to promote and expand collaboration on the public health front, as a fundamental link within ALBA-TCP.

"The effects of the pandemic demand from us a dynamic, supportive and coordinated response," said the Cuban foreign minister, who highlighted the role of this regional integration mechanism in the defense of citizen equality and respect for basic human rights, including free public health.

"Faithful to our humanist essence, the members and guests of ALBA-TCP have defended the right to health and life, despite the economic pressures affecting our countries," said the diplomat at the meeting that took place virtually, in which the Minister of Foreign Trade and Foreign Investment Rodrigo Malmierca, also participated.

Likewise, the top Cuban diplomat expressed his recognition and congratulations to Petrocaribe on its 15th anniversary, "for its extraordinary contribution to the development and energy security of our countries.

The 20th Political Council and the 10th Economic Council of the Bolivarian Alliance for the Peoples of America - People's Trade Treaty (ALBA-TCP) have as a special motivation the 15th anniversary of Petrocaribe's foundation, created on June 29, 2005, an alliance deeply committed to the region's energy security, promoted by Comandante Hugo Chávez Frías.