President of Cuba calls for unity to face new challenges 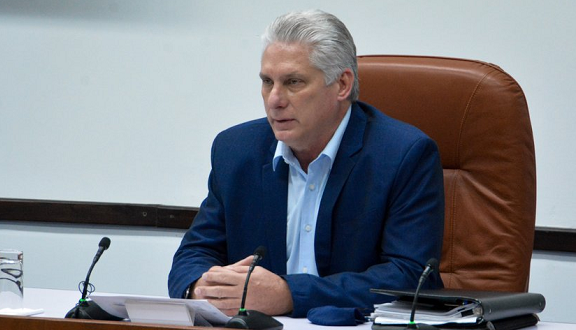 Havana, January 1 (RHC)-- Cuban President Miguel Díaz-Canel called on his compatriots to maintain unity to face the challenges of 2021 after an adverse year culminated in victory.

Through a video published on the Presidency's website, the President reiterated his gratitude to the Cuban people for their contribution to the nation's efforts and called to celebrate the successes achieved as a great family.

Thanks to our beloved homeland and our people. Viva Cuba Viva, Happy New Year and congratulations on the 62nd anniversary of the Cuban Revolution's triumph, he said.

The President made those remarks on the occasion of the New Year and the 62nd Anniversary of the Victory of the Cuban Revolution, during the celebration on the last Council of Ministers Thursday.

He also congratulated the Cuban people on Twitter for the arrival of the New Year and the 62nd anniversary of the triumph of the Revolution, under the label #CubaViva, #LivingCuba

The phrase gives name to the campaign promoted on the island that expresses the nation's will to resist the unprecedented intensification of the U.S. blockade and the increase in hostility from Washington after President Donald Trump arrived at the White House in 2017.

During the year that ended, amid the health emergency caused by the Covid-19 pandemic, Washington intensified its hostility towards the island.

According to Foreign Minister Bruno Rodriguez, this hostile policy caused losses of more than five billion dollars in one year for the first time in six decades.

Around 200 measures aimed at strangling the Cuban economy and millions of dollars destined to finance internal subversion and promote regime change are among the actions of the current Republican administration against the island between 2019 and the year that ended.