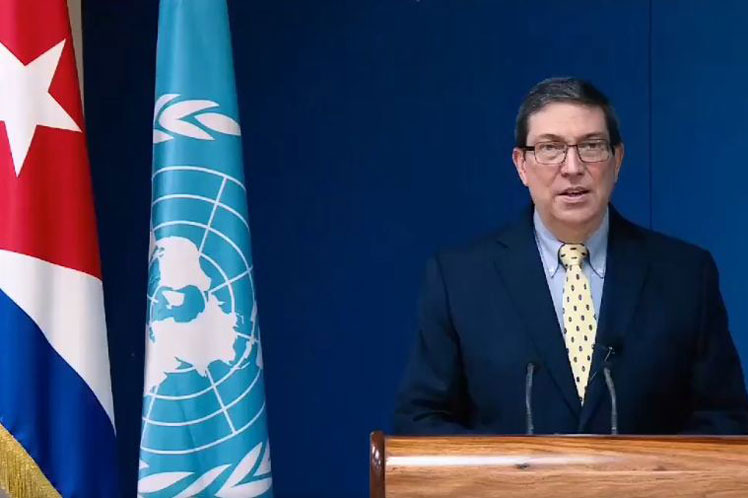 United Nations, February 18 (RHC)-- Cuba's Foreign Minister, Bruno Rodríguez, reaffirmed before the United Nations on Thursday his country's commitment to combat all manifestations of racial discrimination part of the principles that the Cuban Revolution sustains.

In a virtual address during a special session of the United Nations Economic and Social Council (ECOSOC), the top Cuban diplomat recalled how since the revolutionary triumph in January 1959, a process of radical transformations began on the island that dealt a devastating blow to the structural bases of racism.

In this way, he added, the Revolution eradicated institutionalized racial discrimination, and today the Caribbean nation shows significant progress and results in the fight against racism. However, there is still work to be done.

As part of the government's commitment, in November 2019, the National Program against Racism and Racial Discrimination was approved, coordinated by a Commission headed by the President of the Republic, Miguel Díaz-Canel, the foreign minister said.

But the Revolution is not limited to fighting against that scourge at its borders; thousands of Cubans supported, even at the cost of their lives, the struggles of the African peoples for their independence and against the vicious apartheid regime, Rodríguez stressed.

Many others, he added, have offered their solidarity aid to those countries' people, particularly in the area of health.

Likewise, the foreign minister stressed, Cuba will continue to move forward with concrete actions 'in correspondence with the sense of social justice and humanism that characterizes its socialism'.

Cuba's National Hero, José Martí, said: 'there is no race hatred because there are no races' and that will continue to be our premise, he stressed.

Rodriguez also warned about the disturbing wave of racism, racial discrimination, and xenophobia in the world today. According to him, social media platforms and other forms of communication are used to promote racism.

He warned that some political parties and their leaders are even spreading hate speech that blames society's ills on those they label as 'the others'.

The Covid-19 pandemic and the crises it generates further expose the unjust international order that for decades has made the poor, the Afro-descendant or the migrant the object of all kinds of discrimination, the Cuban foreign minister said.

While this year marks the 20th anniversary of the historic World Conference against Racism, Racial Discrimination, Xenophobia, and Related Intolerance, the objectives set out in the Durban Plan and Program of Action are yet to be achieved, he noted.

Likewise, the Cuban foreign minister regretted, the world is not close to achieving what was agreed in the 2030 Agenda for Sustainable Development.

Tuesday's special meeting at ECOSOC on the elimination of racism, xenophobia, and discrimination in the decade of action of the Sustainable Development Goals includes virtual interventions by high-level dignitaries and foreign ministers from different countries.