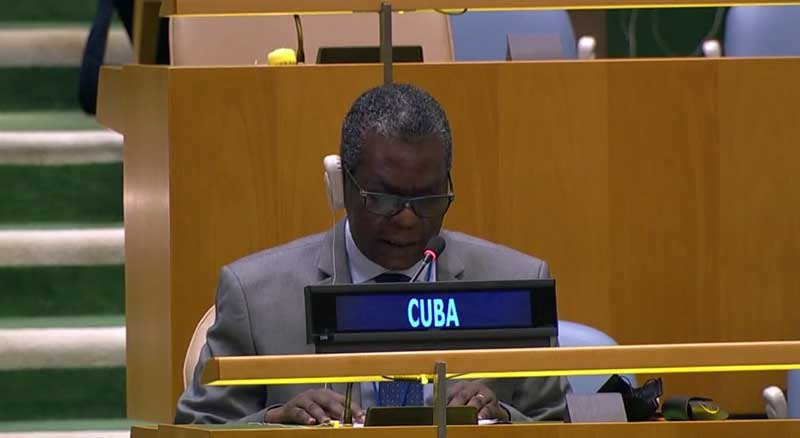 Cuba's PR to the UN, Pedro Luis Pedroso, addresses on the occasion of the
​​​​​International Day of Remembrance of the Victims of Slavery and the Transatlantic Slave Trade. March 25, 2021

Havana, Mar 25 (RHC) Cuba's permanent representative to the United Nations, Pedro Luis Pedroso, stressed Thursday that the best tribute to the victims of slavery and the transatlantic slave trade is solidarity with the countries that suffered that scourge.

Speaking at a plenary session of the General Assembly, Pedroso stressed the importance of the necessary remembrance. At the same time, he noted the tribute's symbolic character as long as the root causes of inequality, exclusion, racism, and discrimination that survived slavery and are still suffered by millions of people, particularly those of African descent, are not addressed and resolved.

Reparations and full compensation to the peoples and groups affected by that horrendous and imprescriptible crime are moral duty, the Cuban ambassador said.

He also recalled that developed countries and their consumer societies have been the beneficiaries of conquest, colonization, slavery and the transatlantic slave trade and are therefore responsible for the extermination associated with them.

As a consequence of the cruel and inhuman trade whose victims we remember, around one million 300 thousand African slaves arrived in Cuba to replace the indigenous population's labor force practically exterminated by Spanish colonialism.

Today, Pedroso said, the Cuban nation, its culture, idiosyncrasy, and popular religiosity, which are deeply mestizo, could not be explained without the African contribution.

The diplomat insisted on the urgent need for greater international solidarity with the countries from which those millions of people were forcibly uprooted.

Every March 25, the International Day of Remembrance of the Victims of Slavery and the Transatlantic Slave Trade offers an opportunity to honor and remember those who suffered and died at the hands of this brutal system.