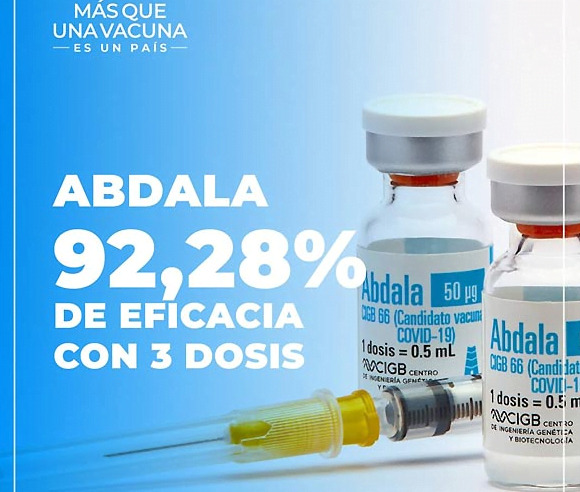 Havana, June 21 (RHC)—The Director of the Genetic Engineering and Biotechnology Center  (CIGB) Martha Ayala informed President Miguel Diaz-Canel  Monday that the Abdala vaccine candidate,  designed by her institution,  has overall efficacy of 92,28% with three doses, after the completion of Phase III trial.

In an encounter with the vaccine developers at the Havana-based biotech center, the President stressed that in less than 48 hours, Cubans had received two good news that is a milestone.

"This can be news in any part of the world, but these achievements are coming from scientists from a small island stricken by the reinforcement of the US blockade," he said.

Diaz-Canel conveyed the warmest congratulations, admiration, and gratefulness to the scientists who have worked on the vaccine candidates.

"Hit by two pandemics COVID19 and the Blockade, our scientists from the Finlay Institute and the CIGB, have jumped over all obstacles and have given us two very effective vaccines: Soberana02  and Abdala ", he also wrote on Twitter.

On Saturday, the Finlay Institute announced that the Soberana 02 vaccine has an efficacy of 62%.

Both vaccines are expected to be granted emergency authority by local regulators shortly.

From Argentina and Jamaica to Mexico, Vietnam, and Venezuela, several countries have expressed an interest in buying Cuba's vaccines. In addition, Iran started producing Soberana 2 earlier this year as part of late-phase clinical trials.

Cuba's authorities have already started administering the experimental vaccines en masse as part of "intervention studies" they hope will slow the spread of the virus.

About a million of the country's 11.2 million residents have been fully vaccinated to date.