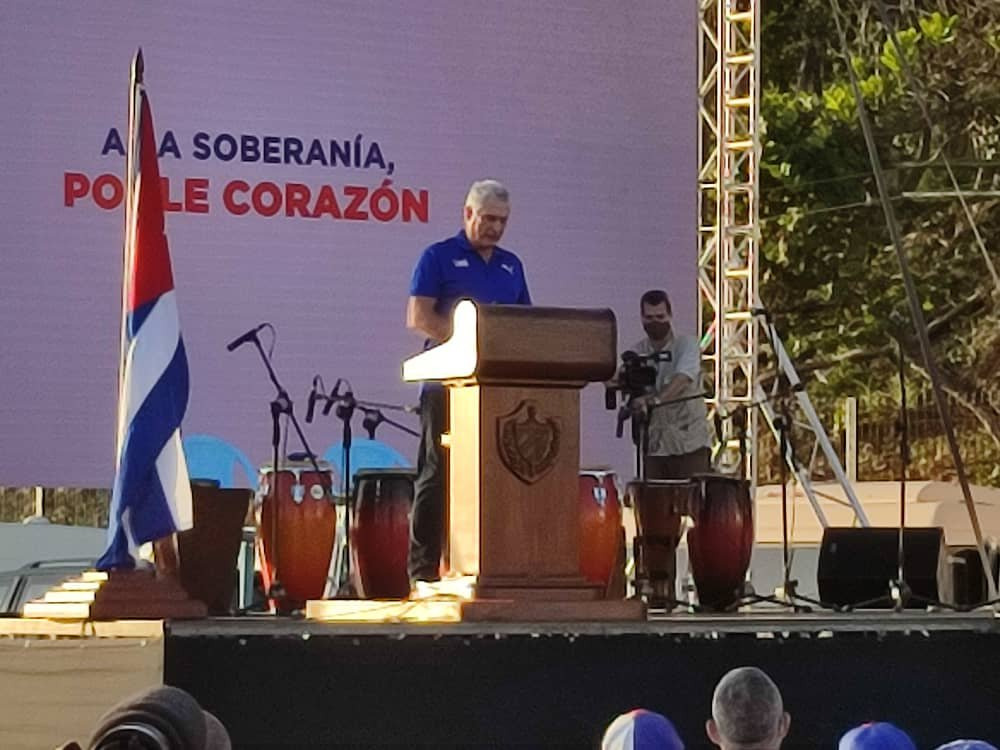 Havana, July 17 (RHC)—Cuban President Miguel Diaz-Canel Bermudez said Saturday that the Revolution remains by the people, for the people and with the people, and denounced the intense media campaign launched to give the false impression that the island's people are up in arms, and that the government is cracking down on protests.

In his remarks during a mass rally headed by Army General Raul Castro and attended by some one hundred thousand Habana residents, the leader of the Cuban Communist Party talked about the events that occurred last Sunday.

He alluded to the false narration of the events and stressed that most of the acts of vandalism took place before his TV appearance on Sunday.

"After my appearance, the events have been portrayed as if they took place after my legitimate call to the revolutionaries to defend the Revolution. There is an intention to tell the story backwards," he said.

The ill-intentioned manipulation has deliberately disregarded all the calls for unity, peace, and solidarity among us all.  The interpretation given is that we asked for a civil war," he said.

The President noted that the image of Cuba being given to the world is a fabrication.

Ït is not rare then that under such media bombardment, some people doubt and take a stand on a separation that does not exist.

"I don't judge them. I don't condemn them.  I understand that the adversary's weapons are overwhelming, but the Revolution remains by the people, for the people, and with the people," he stressed.

Dias-Canel continued his remarks, stating that when the hashtag  SOSMatanzas died down in the social media networks,  the promoters of the humanitarian intervention were not seen by the side of Matanzas or Cuba.

"It was the same humble people who suffer the consequences of the blockade, and it was the Cuban government who were by their side,¨ he said.

¨When a people have come this far in achieving their dreams and conquering rights that for half of the world are still an illusion,  neither violence nor fear will deter them."

Diaz Canel noted, however, that none of the denunciations made put authorities away from the necessary self-criticism, or of the pending rectifications,  or of a profound revision of methods and work styles that are at odds with the willingness to serve the people, such as bureaucracy, obstacles, and insensitivity.

The President reiterated his commitment to work on and demand the implementation of the government's plan, reviewed in light of the possible mistakes made in the last two years of enormous pressures.