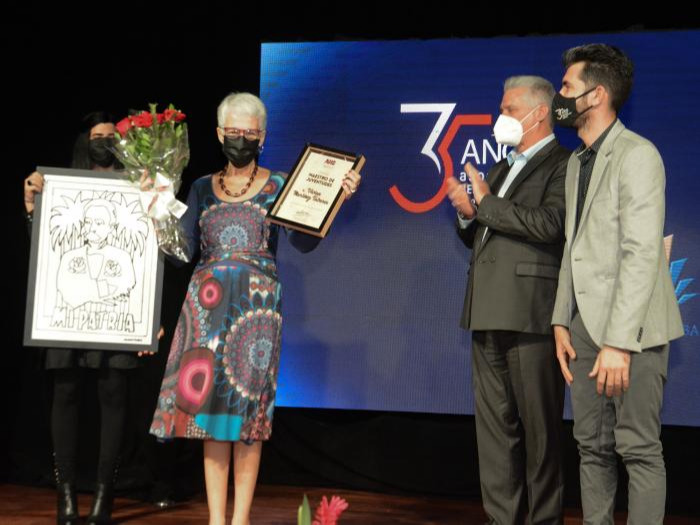 Havana, October 19 (RHC)-- The role of the Hermanos Saíz Association (AHS) in the development of young and committed art, as this organization reaches its 35th anniversary, and the imprint of the José Martí National Library (BNJM) on Cuban culture, on its upcoming 120th birthday, were highlighted in a tribute ceremony led by Miguel Díaz-Canel Bermúdez, President of the Republic.

Moments before the ceremony, held at the Library on Monday, the President inaugurated the new Eliseo Diego children and youth hall and unveiled the name that from now on will bear the Library´s theater, that of outstanding Cuban intellectual Armando Hart Dávalos.

Omar Valiño, director of the National Library, said its workers bow their heads before the pioneers who decided to offer their heritage and archives to provide Cuba with such an institution.

Yasel Toledo, vice president of the Brothers Saiz Association, referred to the Library as a very Cuban cathedral of knowledge and pointed out how, on a new anniversary of the Association, they return to the encounter with the masters, to the embrace with those who are referents for their work and qualities as human beings.

Then, he announced the winners of the Maestro de Juventudes distinction, which was delivered by Díaz-Canel and Rafael González Muñoz, President of the Association.

The Hermanos Saiz Association, named after two young brothers murdered during the Batista Dictatorship, is an organization with cultural and artistic purposes that selectively brings together, voluntarily, the most important writers, artists, intellectuals, and promoters from all over Cuba, young people up to 35 years of age.