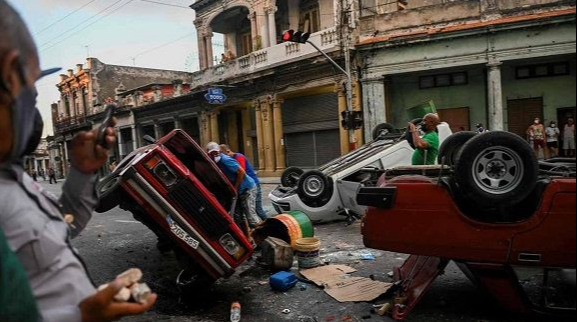 The Toyo corner was the scene of violent actions by individuals encouraged from the United States
Photo: Archivo/RHC

Havana, February 11 (RHC)-- A Cuban court tried 33 people accused of participating in violent actions and vandalism in the municipality of 10 de Octubre, in Havana, on July 11 and 12.

The Cuban National Television's (NTV) prime time program Noticiero Nacional reported that experts and authorities of the judicial system agreed that the events that took place were the core of the riots of those days.

In the report, the accused showed their repentance for their participation in the actions of public disorder, dangerousness and violence, while relatives of the detainees confirmed the transparency and legality of the process in court.

In fact, the families of the accused and victims of the events attended the oral hearing in which a prosecutor with his assistants, five judges and 20 defense lawyers participated.

NTV explained that the experts demonstrated the involvement of each of the accused through the use of specialized and comparative techniques that allowed them to locate those involved.

The most recurrent violations that occurred in that Havana area were sedition, assault and public disorder.

In this hearing, or in any of those carried out on the island, no minors under 16 years of age were tried, the report emphasized,  The Penal Code in force establishes that "criminal responsibility is demandable to the natural person from the age of 16 years old at the moment of committing the punishable act".

One of the accused stated that he was originally from another province and could not hire a lawyer in the capital, but he was immediately granted a court-appointed lawyer with whom he communicated extensively and confidently.

At another time, defense lawyers explained to NTV that they acted without pressure, with the support of the judicial system, they had access at all times to the detainee and to the evidence gathered during the investigation to establish a strategy in court.

Cuba presented evidence that the riots were the result of a plan designed by the U.S. government to provoke destabilization at a time when the country was facing a complex situation due to COVID-19 and the tightening of the blockade imposed by Washington.