Diaz-Canel highlights the work of firefighters in Matanzas 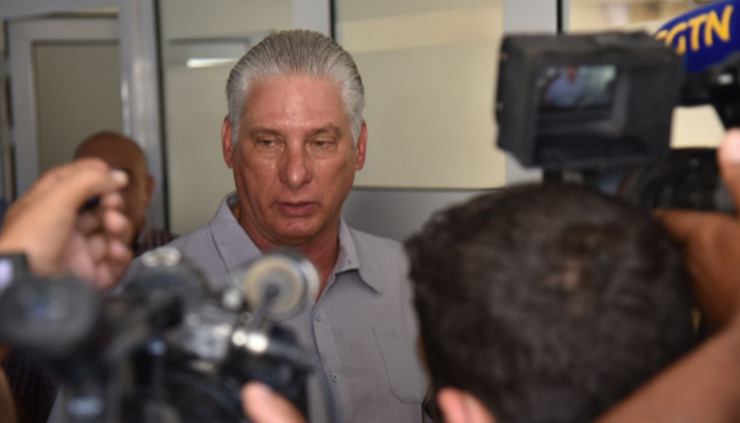 Havana, August 7 (RHC)-- Cuban President Miguel Díaz-Canel, on Sunday, highlighted the work of firefighters, rescuers, and personnel facing a major fire in the industrial zone of Matanzas in hazardous conditions.

In a meeting with the press, after receiving the representatives of the Mexican and Venezuelan delegations that arrived early in the morning with decisive help to extinguish the flames, the president said that there are still days left to extinguish the fire that started in the supertanker area, around 7:00 p.m. last Friday.

Díaz-Canel informed that the recovery is being prepared and added that from this accident, it is necessary to draw experiences to update the plans to face these events, which are atypical in Cuba.

He highlighted the solidarity of Mexico and Venezuela "because it is based on a feeling of humanism, understanding, and willingness, and that response has much to do with the conduct that Cuba has always followed," he said.

The head of state insisted that there was no possible speculation as to the cause of the fire. "It was a lightning strike and had a lightning rod system. The magnitude of the electric discharge is being investigated", he added.

"We are going to overcome this adversity, and we are already doing it; we will always go for more, we will never stop in adversity," he assured.

He also referred to the heroism and stoicism of those in the industrial zone. "The attitude and solidarity of the Cuban people amid the current energy situation are also remarkable," he said.

The dignitary spoke of the thousands of messages, of the people who arrived with donations for those working hard in the face of the flames.

He highlighted that there was an international response. "Several governments, institutions, and people in the world offered their support, and that is due to what the Cuban Revolution always cultivates: feeling, solidarity, and love," he emphasized.