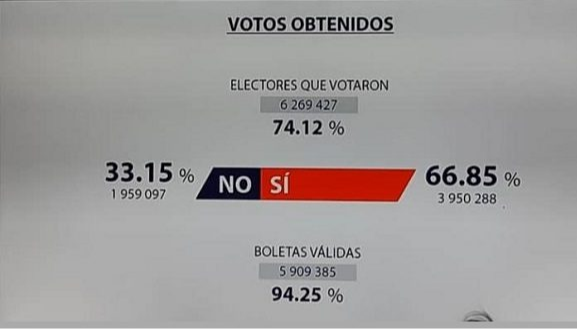 National Electoral Council reports the official results of the  Referendum

In the early hours of September 26, after the voting, the President of the National Electoral Council announced that the new Family Code had been approved. During the referendum, the new law received more than 60% of the valid votes.

The National Electoral Council, by the provisions of Articles 28 subsection c) and article 35 subsection a) of the Electoral Law, validated its results, both in Cuba and abroad.

For this purpose, it proceeded to verify the cases of those voters who, on the day designated by the Council of State for voting, exercised their right in a polling place other than the one where they were registered; because they were performing tasks related to production, services, teaching or other justified reasons that made it impossible for them to go where they were registered; therefore, they were included in the new place where they voted, after accrediting their status before the members of the polling station.

The National Electoral Council offered guarantees for citizen participation in the referendum through the exceptional registration process.  This allowed an important number of voters the possibility to exercise their right to vote.

For this purpose, 224 special polling stations were created, located in the air, rail, and bus terminals; in hospitals, hotels, and other places with a high concentration of voters with the right to vote, as legally established. Other voters in these conditions voted in the polling places closest to where they were located at that moment.

The final results reported have demanded hard work from our electoral authorities and specialists of the Electoral Registry, with total transparency, at a time when we are recovering from the effects of hurricane Ian and the energy emergency, affirmed Alina Balseiro, president of the National Electoral Council. She ratified the recognition to all the participants for the work carried out and, especially, to the electoral authorities and our people.