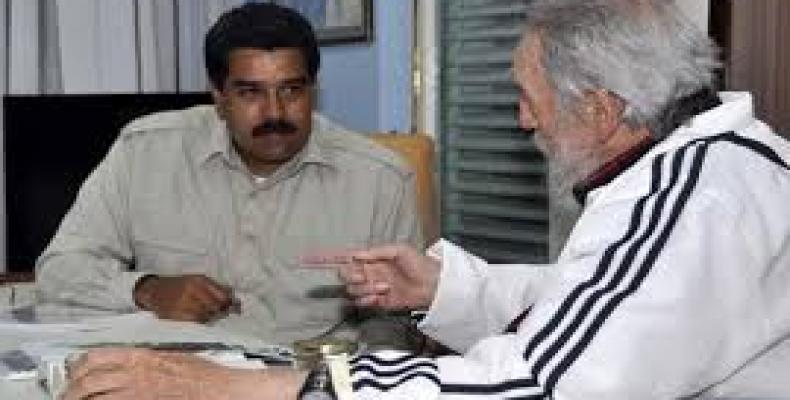 Caracas, April 14 (RHC) -- Venezuelan President Nicolas Maduro said on Monday that after participating in the Summit of the Americas in Panama, he traveled to Cuba, where he met Cuban revolutionary leader, Fidel Castro.

Venezuela President, Nicolás Maduro, spoke on Monday in Caracas about his meeting with the leader of the Cuban Revolution, Fidel Castro, after participating in the Seventh Summit of the Americas, held in Panama.

According to reports in the media, Fidel and Maduro talked for four hours about the Summit. "We were sharing criteria and recalling the history of resistance and struggle of Latin America, and how this continent could find the path of the liberators, how it found its new path, its new union," Maduro stated.

During the act of commemoration of the Day of the Bolivarian Militia and the 13th anniversary of the unsuccessful coup against President Hugo Chávez, Maduro recalled that the Eternal Commander never hesitated to embrace Fidel and to help break the media and political blockades that were imposed against Cuba. "Cuba was the inspiration and the beacon of light and hope for revolutionary patriots over many decades and several generations."