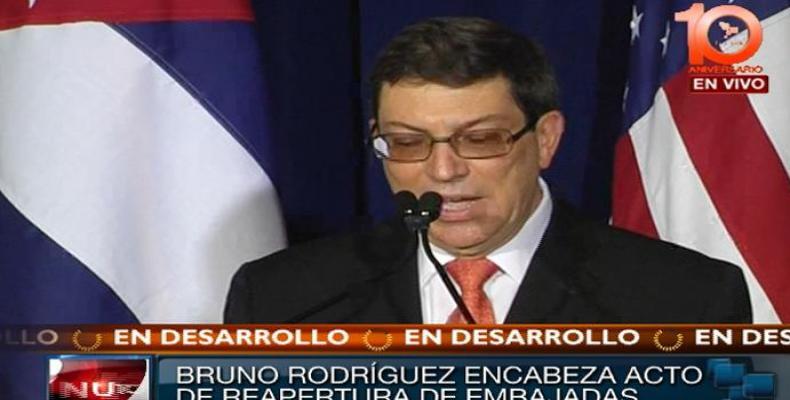 STATEMENT BY BRUNO RODRÍGUEZ PARRILLA, MINISTER OF FOREIGN AFFAIRS OF THE REPUBLIC OF CUBA, AT THE CEREMONY TO RE-OPEN THE CUBAN EMBASSY IN THE UNITED STATES. WASHINGTON, JULY 20, 2015.

Officials of the US Government accompanying her;

Esteemed Representatives of the US Organizations, Movements and Institutions who have made huge efforts in favor of the change of the US Cuba policy and the improvement of bilateral relations;

Esteemed Representatives of the Organizations and Movements of the patriotic emigration;

Comrades of the Cuban Delegation;

Officials and workers of the Cuban Embassy;

The flag that we revere at the entrance of this room is the same that was hauled down here 54 years ago, which was zealously kept in Florida by a family of liberators and later on by the Museum of our eastern city of Las Tunas, as a sort of premonition that this day would certainly come.

Flying once again in this place is the lone-star flag which embodies the generous blood that was shed, the sacrifices made and the struggle waged for more than one hundred years by our people for their national independence and full self-determination, facing the most serious challenges and risks.

Today we pay homage to all those who died in its defense and renew the commitment of the present generations, fully confident on the newer ones, to serve it with honor.

We evoke the memory of José Martí, who was fully devoted to the struggle for the freedom of Cuba and managed to get a profound knowledge about the United States: In his “North American Scenes” he made a vivid description of the great nation to the North and extolled its virtues. He also bequeathed to us a warning against its excessive craving for domination which was confirmed by a long history of disagreements.

We’ve been able to make it through this date thanks to the firm and wise leadership of Fidel Castro Ruz, the historic leader of the Cuban Revolution, whose ideas we will always revere with utmost loyalty. We now recall his presence in this city, in April of 1959, with the purpose of promoting fair bilateral relations, as well as the sincere tribute he paid to Lincoln and Washington. The purposes that brought him to this country on such an early time are the same that have pursued throughout these decades and coincide exactly with the ones that we pursue today. Many in this room, whether politicians, journalists, outstanding personalities in the fields of arts or sciences, students or American social activists, have been able to treasure unlimited hours of enriching talks with the Commander, which allowed them to have a better understanding of our reasons, goals and decisions.

This ceremony has been possible thanks to the free and unshakable will, unity, sacrifice, selflessness, heroic resistance and work of our people and also the strength of the Cuban Nation and its culture.

Several generations of the revolutionary diplomacy have converged in this effort and offered their martyrs. The example and vibrant speech of Raúl Roa, the Chancellor of Dignity, have continued to inspire Cuba’s foreign policy and will remain forever in the memory of the younger generations and future diplomats.

I bring greetings from President Raúl Castro, as an expression of the good will and sound determination to move forward, through a dialogue based on mutual respect and sovereign equality, to a civilized coexistence, even despite the differences that exist between both governments, which makes it possible to solve bilateral problems and promote cooperation and the development of mutually beneficial relations, just as both peoples desire and deserve.

We know that this would contribute to peace, development, equity and stability in the continent; the implementation of the purposes and principles enshrined in the UN Charter and in the Proclamation of Latin America and the Caribbean as a Zone of Peace, which was signed at the Second Summit of the Community of Latin American and Caribbean States held in Havana.

Today, the re-establishment of diplomatic relations and the re-opening of embassies complete the first stage of the bilateral dialogue and pave the way to the complex and certainly long process towards the normalization of bilateral relations.

The challenge is huge because there have never been normal relations between the United States of America and Cuba, in spite of the one and a half century of intensive and enriching links that have existed between both peoples.

The Platt Amendment, imposed in 1902 under a military occupation, thwarted the liberation efforts that had counted on the participation or the sympathy of quite a few American citizens and led to the usurpation of a piece of Cuban territory in Guantánamo. Its nefarious consequences left an indelible mark in our common history.

In 1959, the United States refused to accept the existence of a fully independent small and neighboring island and much less, a few years later, a socialist Revolution that was forced to defend itself and has embodied, ever since then, our people’s will.

I have referred to History to reaffirm that today an opportunity has opened up to begin working in order to establish new bilateral relations, quite different from whatever existed in the past. The Cuban government is fully committed to that.

Only the lifting of the economic, commercial and financial blockade which has caused so much harm and suffering to our people; the return of the occupied territory in Guantánamo and the respect for Cuba’s sovereignty will lend some meaning to the historic event that we are witnessing today.

Every step forward will receive the recognition and the favorable acceptance of our people and government, and most certainly the encouragement and approval of Latin America and the Caribbean and the entire world.

We reaffirm Cuba’s willingness to move towards the normalization of relations with the United States in a constructive spirit, but without any prejudice whatsoever to our independence or any interference in the affairs that fall under the exclusive sovereignty of Cubans.

To insist in the attainment of obsolete and unjust goals, only hoping for a mere change in the methods to achieve them will not legitimize them or favor the national interest of the United States or its citizens. However, should that be the case, we would be ready to face the challenge.

We will engage in this process, as was written by President Raúl Castro in his letter of July 1st to President Obama, “encouraged by the reciprocal intention of developing respectful and cooperative relations between our peoples and governments.”

From this Embassy, we will continue to work tirelessly to promote cultural, economic, scientific, academic and sports relations as well as friendly ties between our peoples.

We would like to convey the Cuban government’s respect and recognition to the President of the United States for urging the US Congress to lift the blockade as well as for the change of policy that he has announced, but in particular for the disposition he has showed to make use of his executive powers for that purpose.

We are particularly reminded of President Carter’s decision to open the respective Interests Sections back in September of 1977.

I am pleased to express my gratitude to the Government of the Swiss Confederation for having represented the Cuban interests for the last 24 years.

On behalf of the Government and the people of Cuba, I would like to express our gratitude to the members of Congress, scholars, religious leaders, activists, solidarity groups, business people and so many US citizens who worked so hard for so many years so that this day would come.

To the majority of Cubans residing in the United States who have advocated and called for a different kind of relation of this country with our Nation, we would like to express our recognition. Deeply moved, they have told us that they would multiply their efforts and will remain faithful to the legacy of the patriotic emigration that supported the ideals of independence.

We would like to express our gratitude to our Latin American and Caribbean brothers and sisters who have resolutely supported our country and called for a new chapter in the relations between the United States and Cuba, as was done, with extraordinary perseverance, by a lot of friends from all over the world.

I reiterate our recognition to the governments represented here by the Diplomatic Corps, whose voice and vote at the UN General Assembly and other fora made a decisive contribution.

From this country José Martí organized the Cuban Revolutionary Party to conquer freedom, all the justice and the full dignity of human beings. His ideas, which were heroically vindicated in his centennial year, continue to be the main inspiration that moves us along the path that our people have sovereignly chosen.

Thank you, very much.