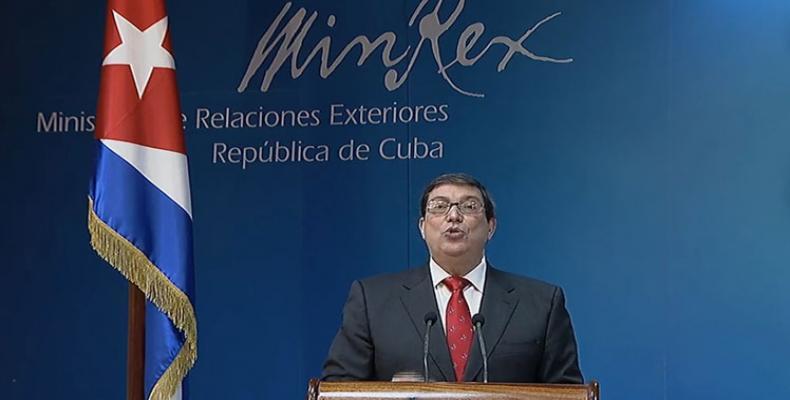 Cuba's top diplomat strongly denounced the attack on our embassy in Washington, DC, which occurred on April 30th.  Bruno Rodriguez said there has yet to be an official statement from the Donald Trump administration regarding the attack.  And he questioned why the U.S. State Department maintains silence over the terrorist action.

During the virual press conference, which was broadcast on Cuban radio and television and transmitted on Facebook, Twitter and other social networks, the Cuban foreign minister said that the attack on the island's embassy in Washington, DC cannot be separated from the constant attacks by U.S. administrations against the Cuban Revolution.

"The attack against our diplomatic headquarters in Washington is a terrorist act, the result of the aggressive speech of the United States government against Cuba."

Cuban Foreign Minister Bruno Rodriguez outlined the personal background of the 42-year-old man, who attacked the embassy in Washington with an AK-47 rifle.  The Cuban born, Alexander Alazo Baró, has lived for some time in the United States, but occasionally visited his native Cuba.

During the press conference, surveillance video was shown of Alexander Alazo shooting at the Cuban Embassy in the early morning hours of Thursday, April 30th.

While the Cuban government is working to obtain more information on this terrorist attack, the Cuban foreign minister called on the U.S. to cooperate with Cuban authorities in the investigation and guarantee security for the island's diplomatic personnel in the United States, in both Washington, DC and New York City at the Cuban Mission to the United Nations.