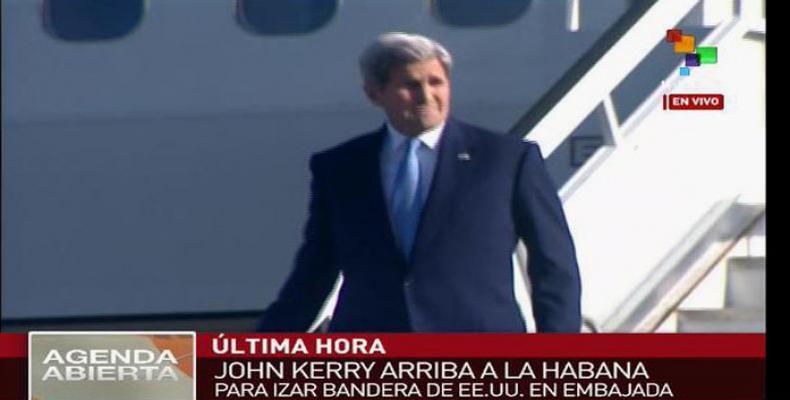 Havana, August 14 (RHC)-- U.S. Secretary of State John Kerry has arrived in Havana to preside over the official opening of the American Embassy Friday morning.

The solemn ceremony will see the raising of US flag at the U.S. Embassy for the first time in more than 50 years. Speeches will follow, including the main address by Kerry.  Also Cuban American poet Richard Blanco will read “Matters of the Sea,” a poem he has written for the occasion.

After the flag ceremony outside the U.S. embassy in the central neighborhood of Vedado, the top U.S. diplomat will meet with Cuban Foreign Minister Bruno Rodriguez at the headquarters of the Cuban Foreign Ministry.  Both will give a joint press conference at noon from Havana's Hotel Nacional.

The visitor is also scheduled to meet with the Chief of the Federal Department of Foreign Affairs of the Swiss Confederation, Didier Burkhalter, currently in Cuba, and with the Archbishop of Havana, Cardinal Jaime Ortega Alamino.

Kerry came accompanied by an entourage of 20 U.S. political figures, including the Assistant Secretary of State for Western Hemisphere Affairs, Roberta Jacobson, Democratic Senator Patrick Leahy, and other members of the U.S. Congress, federal agencies, Cuban-Americans, entrepreneurs and a large media contingent.

John Kerry is the highest-ranking U.S. official to visit Cuba since the Franklin Roosevelt administration.

The U.S. and Cuba re-established diplomatic relations on July 20 this year, after months of negotiations over a range of issues, including the over five decades economic blockade imposed by Washington on Havana.  This sanctions package has been labeled by Cuba as the main obstacle to the normalization of relations both countries pursue.

Likewise, Cuba is asking for the U.S. withdrawal from the illegally occupied territory in the eastern province of Guantanamo and the cessation of actions aimed at subverting internal order in Cuba.