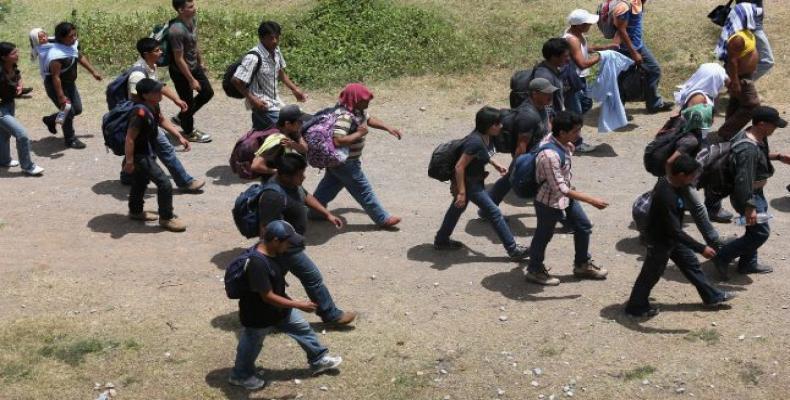 Mexican authorities are estimating that between nine and ten thousand migrants will concentrate in the next few days in the northern border city of Tijuana, bordering with the United States, in a move that has awakened many commentaries and speculations about its possible outcome.

Nothing is known about the sponsors and organizers of this massive move, that involves thousands and thousands of Honduran men, women and children who left their country crossed Guatemala and entered Mexican territory seeking the US border.

The caravan was soon joined by penniless Salvadoran and Guatemalan citizens, in a move that has its only precedents in the north of Africa, Eastern Europe and Asia.

Many are the reactions, particularly those of local residents on the marchers route, who despite their pressing needs gave the marchers food, water and clothing, with special care for the many children who accompany their parents in this saga. The fact that the marchers included their children shows the level of anxiety and desperation of the marchers, who seek a more friendly future than that denied to them in their nations of origin, where hunger, malnutrition, preventable diseases and desperation are their daily fare.

The so called Northern Central American Triangle, composed of Honduras, El Salvador and Guatemala, is the most unequal area in our Continent, a zone where the most abject misery coexists with the most insulting opulence.

Poverty, hunger, disease and overall destitution have fueled the flight northwards of millions of desperate persons along many decades, although the situation has worsened, fueling more caravans.

Migrations have been part of the world's history since men and women appeared in our planet. However, the keynoting factor today is the massive participation in the caravans, proof that poverty, destitution and desperation are fueling the current tragic sagas.

Today's situation, as brutal and offensive to human dignity as it is, offers the world a tragic spectacle. One of these was offered personally by the Major of the Mexican border city of Tijuana, who described the desperate, hungry marchers, an outspoken right winger, who described the marchers as vagrants and dope addicts.

We are facing a new migratory crisis involving nations in Central America, Mexico and the United States, whose outcome is still unknown, but which will offer the world examples of the best and the world. We will all be watching!