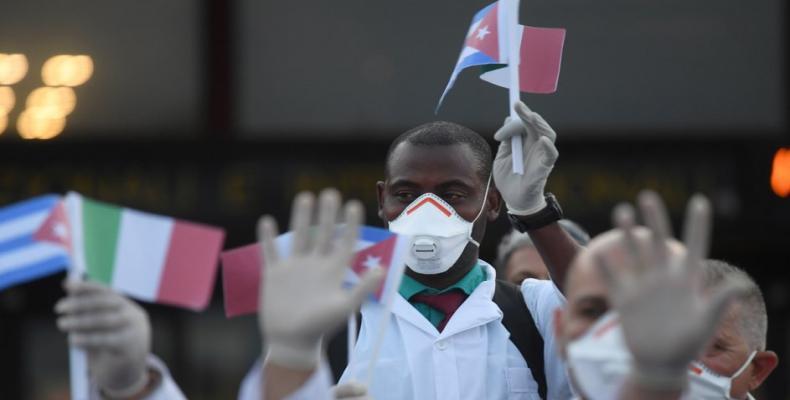 They arrived in the white coats of their profession, waving the flags of Italy and Cuba, to the sustained applause of the Italian airport workers and passengers and local residents. It was a historic reversal of the long-standing tendency of the world-system, in which the colonizing nations, having accumulated wealth through conquest, send medical missionaries as token gestures of aid to those that they have vanquished. This time, a once-colonized nation, audaciously seeing itself as a sovereign nation of science and solidarity, is sending the medical missionaries, having been asked to do so by the provincial leaders of a once-colonizing nation, now ravaged by the consequences of four decades of heartless indifference to the human needs of ordinary people and the barbarous pursuit of the wealthy and the powerful to ever more wealth. They arrive not as a token gesture of compensation for social sins, but with the commitment to the principal of solidarity among nations, convinced that this is the necessary road for humanity, and determined to demonstrate that this alternative, necessary road is indeed possible.

In the midst of the pandemic that has many of the nations of the North in panic, confusion, and division, the small island nation of the white coats is sending medical missions not only to the province of Lombardy in Italy, but also to Venezuela, Nicaragua, Surinam, Granada, and Jamaica. But this is nothing new. Before the outbreak of the endemic, it had more than 28,000 personnel serving in medical missions in sixty-one nations.

In the war at home against the invisible enemy that knows no race, creed, or ideology, the Cuban Ministry of Public Health announced on March 25 that Cuba has fifty-seven confirmed cases of COVID-19. All are imported cases, that is, they were infected outside the country or through contact with a person who had contracted the infirmity outside the country.

On Monday, March 23, the government announced new measures that are designed to eliminate all unnecessary social interaction. People are requested to stay at home, except for work and necessary purchases. The goal is maintaining production and commerce while maximizing social isolation, with as many as possible at home.

Restrictions were announced on the movement of foreign tourists, of which 42,873 remain in the country as of March 24. Those who are in private rental rooms will be relocated gradually to hotels, and tourists will not be permitted to leave the hotels or the private residences. All tourist excursions and tourist car rentals are suspended. Inside the hotels, all recreational activities, concentrations, and night centers are suspended; the gymnasiums and pools will be closed.

The Prime Minister indicated a level of surprise that more tourists did not leave the country during the 72-hour period following the announcement of restrictions for leaving and entering the country. The tourists are free to leave during the thirty-day period in which the restrictions are in place, but flights will be limited, and it is possible that the thirty-day period will be extended.

Some tourists may find that a hotel in Cuba, in spite of being confined to their hotel, is their best option, because of the unsafe and chaotic situation in their countries. In effect, Cuba is offering a safe haven to tourists who by chance were in Cuba at the time of the outbreak of the pandemic, but they must confine themselves to their hotel. At the hotel, they have meals, Internet, international and national television, medical services, and laundry services.

The Prime Minister made clear that the restrictive measures imposed on foreign tourists in the country do not apply to foreign residents, who are temporarily or permanently living in Cuba for motives of work or marriage.

With respect to the restrictions on Cubans leaving the country during the thirty-day period, the Prime Minister explained that some Cubans leave the country in order to purchase items and bring them to Cuba for sale, and that in the present situation, there cannot be people departing for infected countries and then righting a few days later.

The Prime Minister noted that La Mesa Redonda program received more than 6,500 E-mail messages concerning the government announcement of Friday, March 20. The most commented theme, he noted, was the fact that the schools and educational centers remained open. He noted that many expressed agreement with the government that the children and youth were safer in the schools than in the streets, but many expressed concern. In light of the concern of the people, the government has decided to suspend classes, in spite of the fact that the country has not reached the second phase of the Plan, where there are transmissions of the disease within the country, without any tie to foreign travelers. The temporary suspension began on Tuesday, March 24 for primary and secondary schools, and on Wednesday, March 25 for university centers. Classes will resume on Monday, April 20, if conditions permit. Activities for the students will be presented on educational television during the suspension, and the students are being oriented with respect to these activities. The parents are requested to ensure that the children and youth stay at home. The Minister of Work and Social Security, Marta Elena Feitó, announced that mothers of children in primary and special schools can take a leave of absence from work with full pay for first month, and 60% of their salary beginning on the second month. Child care centers remain open, under conditions of health surveillance.

The Prime Minister expressed dissatisfaction that there was not full compliance with the measures announced on March 20. Some night clubs were still operating, some family parties were being held, and people were forming lines outside of stores without maintaining a distance of one meter among themselves. He announced that the police will be gradually employed to ensure enforcement. It should be noted that, in Cuba, the police do not have a conflictive relation with the people, even though there always is in any society an inherent tension between the law enforcement officials and the citizens. Illustrating the essentially non-conflictive relation, during the diesel shortage crisis of last November, the police played a helpful role in organizing the lines for transportation and helping the people to obtain transportation, a fact that was widely noted and appreciated.

In order to eliminate all but necessary movement from province to province, bus, train, and air services within the national territory are suspended, and interprovincial transportation by private vehicles is prohibited.

In addition, mass organizations and structures of local government are to organize visits to each home, in order to ensure that the people are informed and that there is compliance with the plan.

At the end of the special television and radio program of March 25, the Prime Minister announced that, by decision of the First Secretary of the Central Committee of the Communist Party of Cuba, Raúl Castro Ruz, and the President of the Republic, Miguel Díaz-Canel Bermúdez, the Provincial Councils of Defense are activated, with the objective of carrying out tasks of prevention and control necessary to impede the propagation of Covid-19.

Cuba confronts the pandemic with unity, on the basis of a coherent plan that has the backing of the people. It is a nation in which the political leadership is capable of formulating a reasoned and coherent plan, and when it calls upon the people to comply with the plan, it speaks with moral authority and with credibility. The political leadership possess such authority and credibility because it represents and emerges from the institutions of the nation, including: national, provincial, and municipal ministries of the state; the Communist Party; the mass media; the various mass organizations, including those of workers, women, and neighborhoods; the medical and scientific organizations; and the academic institutions. These organizations and institutions have demonstrated a historic and continuing commitment to attending to the needs of the people as their highest priority; none of them respond to the interests of a particular class or sector.

In its comportment in the context of the current global emergency, Cuba once against demonstrates that “power to the people,” which was the hope of our youthful days, is not an impossible dream.