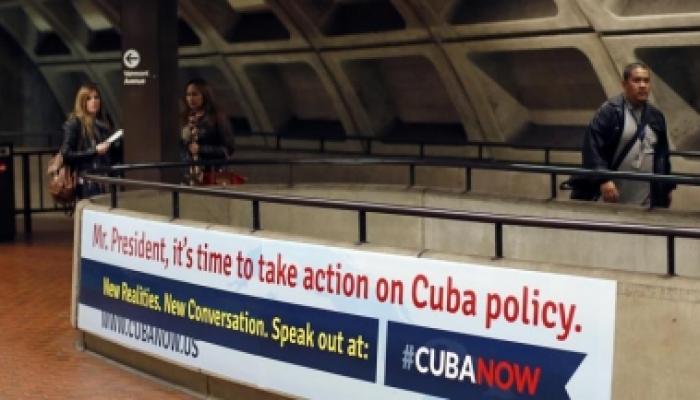 Petrolia, January 12 (RHC) -- When U.S. President Obama announced on December 17th that he would direct his administration to start normalizing relations with Cuba, there was one big obstacle: the blockade on Cuba would still remain in place. As Obama stated, the blockade has been codified in legislation. He announced his intention to engage with Congress about lifting the blockade. But with both chambers of Congress now in the hands of the Republican party, it doesn’t appear likely. But the reality is that Obama doesn’t need Congressional permission. As he did when he announced he would defer deportation for certain undocumented residents, Obama can – and should – act on his own, said Matt Poppe in an article published Monday by Counterpunch newsletter.

Congress would seemingly have to repeal the Helms-Burton Act to undo the blockade, otherwise the President’s hands would be tied. Except in reality the regulations the President is ordered to enforce are not valid, and should not be legally binding on him. This is because there is no legal merit for the regulations against Cuba, which are written based on the application of enemy status to Cuba.

But Cuba does not meet the definition of an enemy. According to the Trading With the Enemy Act (TWEA), an “enemy” is defined as “any individual” or “the government of any nation with which the United States is at war.” The act specifies that the “beginning of the war” is “midnight ending the day on which Congress has declared or shall declare war or the existence of a state of war.”

Congress has never declared war on Cuba. In fact, they haven’t declared war at all since they did so on Japan and Germany in 1941 – not on Korea, Vietnam, Cambodia, Laos, Grenada, Nicaragua, Panama, Afghanistan, Iraq, or any other country. So there is no legal authority for applying the TWEA to Cuba.

The entire set of Cuban Asset Control regulations in the Treasury code are illegitimate. If Cuba is not an enemy, you cannot use a law that only applies to enemies as the basis for a set of rules promulgated under that law.

The President can use his executive power to repeal regulations that have no legal force behind them. If Congress wants the President to continue enforcing the blockade, they would have to amend the TWEA to modify the definition of an enemy, or pass a new law that gives the President the power to enforce a blockade against a country when the United States is not at war with that country.

Repeal of the Treasury regulations would open up travel for American citizens to Cuba and allow most trade between the two countries. There are various other provisions of the blockade that would remain. However, many of these provisions are in direct violation of international law and are also illegitimate.

If Obama were to invalidate the Treasury Regulations to do away with the blockade, he would still presumably have the authority under the Foreign Assistance Act to enforce a blockade against Cuba. But it would be just an option, not an obligation. If Obama wants to stop the blockade, he doesn’t need Congress’s permission. He can just direct his administration to remove the regulations that have been illegally applied by the U.S. government against its citizens and against Cuba for the last 51 years.

Obama has showed he is willing to use his executive authority on other issues, most recently on immigration in November. What he may not be willing to do is expose the fraudulent underpinnings of one of the most widely detested policies in the history of international relations.