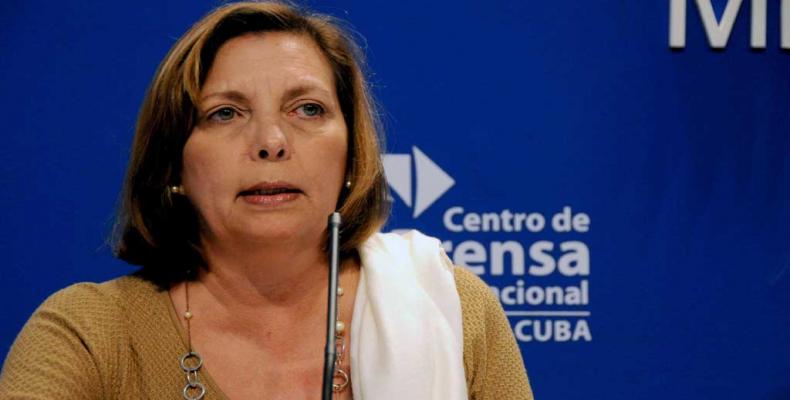 Radio Havana Cuba:  Ambassador, what can you tell us about the decision by the Canadian government to cut its staff at their embassy in Havana?

Josefina Vidal: As I said last Wednesday January 30th, Cuba believes that Canada’s position is incomprehensible, taking into consideration that withdrawing half of its personnel from the embassy, and they say that in the near future they are going to adjust some of the programs that they conduct in that Embassy, considering the amount of staff that will remain in the Embassy.   They are taking actions without considering any concrete evidence or the causes that could have led to the health symptoms being reported by Canadian diplomats.

Of course, this is something that has an impact on the operations of the embassy, and on bilateral relations, since a weakened Embassy does not have the capacity to perform its usual tasks and purposes in order to widen our relations. There will always be a decrease of that capacity, and obviously it has an impact on relations.  And this is why we have made this statement, and why we say that their position is incomprehensible.

Foreign Minister Bruno Rodriguez made reference to this in one of his tweets, and he reiterated his view that Canada’s actions are not understandable and they are disappointing because that’s a decision made without any solid evidence on the causes, even without pointing to any possible hint all of what could have caused this ailment. This is the essence of our position.

Radio Havana Cuba: In your opinion, who is behind all these decisions by Ottawa?

What we have noticed and have conveyed to our Canadian counterparts is that there is a group of unscrupulous people of the extreme right in the United States that are currently very close to decision making in foreign relations within the administration, some of them of Cuban origin.  Some others are very well known hawks that have been involved in events leading to United States participation in conflicts, that in a very opportunistic fashion are taking advantage of this issue in order to portray Cuba as a threat.  And they are using this element as a pretext to increase tensions, leading to collision course with Cuba.

This is an additional consequence deriving of the adoption of decisions of this nature that are not based on conclusive evidence.  The probe on these events continue on the Canadian side.  In Cuba we have convened our best and most brilliant experts to work on our own probe, and we have made them available to Canadian authorities, and also to the U.S. authorities.   But so far there is not any concrete result.

And this is another serious result of the decisions such as the one adopted by Canada, that cater to people seeking any pretext for the application of more aggressive measures against Cuba.

Radio Havana Cuba: On February 24th, the Cuban people will be voting in a referendum on the Constitution, after a very thorough analysis of the draft document.  How is the embassy getting ready for the referendum?

Josefina: Yes, of course we are ready, and we are going to vote “yes.”  We have four polling stations here in official missions.  We have one at our embassy in Ottawa, ours is a small embassy, and we’ll also have polling stations set up in our general consulates in Toronto and Montreal.  And also here in Canada, as a result of the very successful joint venture that we have had with Canadian firm Sherrit for some 25 years, we have a group of Cuban nationals who work permanently at one refinery, in the locality of Fort Saskatchewan, in Alberta. Almost all of them come from Moa, Holguin and Santiago de Cuba, they are engineers who work at the mining sector and they are also going to have their polling station.

Next weekend, we are going to test the polling stations, and we are going to be voting on the 16th, the vote will take place abroad one week before the referendum on February 24th, so that results can be sent to Cuba from all parts of the world where there are Cuban nationals in missions, so that their vote can be taken into consideration by the National Electoral Commission.