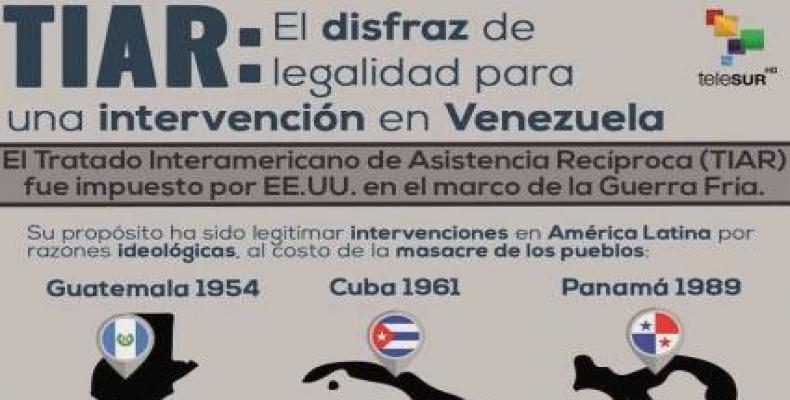 The Ministry of Foreign Affairs denounces the shameful decision to activate the Inter-American Reciprocal Assistance Treaty (IRAT), a treaty that contemplates the use of military force.

The Ministry of Foreign Affairs strongly rejects its invocation under the pretext of the Bolivarian Republic of Venezuela being a threat to peace and security in the hemisphere, when in reality, the interventionist Monroe Doctrine implemented by the United States, hostility toward Venezuela, and the use of this treaty for such ends, that endanger the region’s peace and security.

Once again, the discredited Organization of American States was the vehicle for this outrage, in which an honorable group of nations openly opposed the decision.

Invoking the IRAT, which the United States used to justify military interventions and aggression in the region, causing so much pain and death to Latin Americans and Caribbeans, is a deliberate attempt to provoke a situation that could lead to the use of force to overthrow the legitimate government of President Nicolás Maduro Moros, in flagrant violation of the principles of international law and the Proclamation of Latin America and the Caribbean as a Zone of Peace.

By rejecting this decision, the Ministry of Foreign Affairs calls upon the governments and peoples of Our America and the world to resolutely oppose this measure that pretends to justify, via an artificial legal framework, intervention in the internal affairs of the Bolivarian Republic of Venezuela, which is unacceptable.