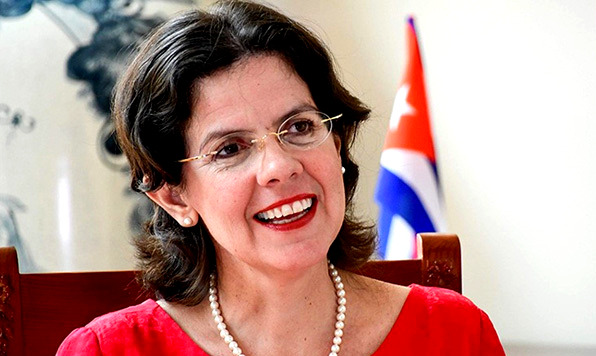 Minnesota Cuba Day; a Chat with the Cuban Ambassador and Minnesota Leaders
Saturday, November 13, 2021  /  via Zoom

Good morning. I would like to begin by thanking the Solidarity Committee on the Americas for sponsoring this event at such an important time for Cuba as well as all those who have collaborated to put this webinar together. I also deeply appreciate the participation of all panelists who will surely express jointly the whole universe of possibilities for closer relations between Cuba and Minnesota.

Humbly I can share that Cuba is defeating the pandemic. In our case, we have had to face the negative consequences for public health and the economy, common to the rest of the countries, in combination with the effects of an intensified US blockade. The Trump administration put into effect 243 additional measures, more than 60 conceived during the pandemic, which the Biden administration fully continues to implement. 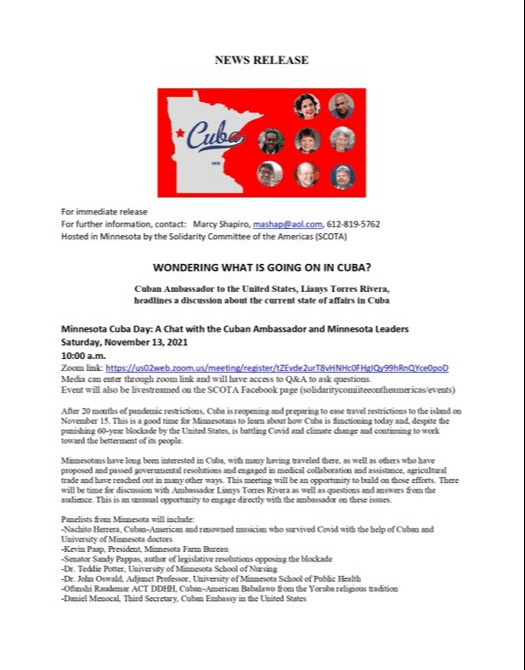 Minnesota Cuba Day; a Chat with the Cuban Ambassador and Minnesota Leaders
Saturday, November 13, 10-11:30 am via Zoom

The unjustified and politically-motivated inclusion of Cuba in the State Department list of sponsors of international terrorism, the restrictions on family remittances and travel to Cuba, the persecution of Cuban financial assets abroad, the pressure against our international suppliers, - including those who sell us fuel and medical supplies necessary to combat the pandemic, the demonization of our internationalist medical brigades, are among the most absurd and outrageous punitive measures imposed against Cuba.

However, thanks to the heroic resistance of the Cuban people, and to a health and scientific system that puts man at the center of its actions, Cuba has been able to create three vaccines (Soberana 02, Abdala and Soberana Plus), two other vaccines candidates, as well as therapies for the prevention and treatment of the disease, which has proven to be highly effective in the epidemiological control.

Currently, 70% of the population has been fully vaccinated and almost 90% of the population has at least one dose. Cuba has been the first country to start a vaccination program for minors, from 2 years old, which already reaches more than 90% of this group. Consequently, the numbers of daily infections and deaths have decreased significantly. For example, Thursday, November 11, Cuba registered 362 cases throughout the country, with only one deceased. The lethality rate is 0.86%, compared to 2.02% in the world and 2.44% in the Americas. The recovery rate for patients is 98.9%.

That is why the Cuban authorities announced in September this year that as of November 15, Cuba would gradually open its international borders. As part of the new health protocols, the mandatory quarantine requirement is repealed. It will only be necessary to show proof of vaccination or a negative PCR test performed within the last 72 hours to enter the country.

On November 8th, students from 11-17 years old joyfully returned to the classrooms, the small ones will do it next Monday. People began to meet again in public places such as the well-known Havana´s seafront Malecon. Inter-province transportation, economic, cultural and social activity begins to recover. Cuba returns to normal, or as we say, the new normal.

But this optimistic scenario would not have been possible without friends. Cuba sent more than 50 medical brigades to around 40 countries and territories to help fight the pandemic, joining Cuban health personnel previously present in 59 countries. The achievements of the Cuban biotech and medicine have also benefited populations in need around the world.

In the same way, we have received and are receiving many expressions of solidarity from governments and peoples of the world, including the American people. I take this opportunity to thank everyone in Minnesota who worked for the “Syringes for Cuba” campaign, which contributed to the Cuban vaccination program.

And this is not strange, since Cuba and Minnesota have a long history of fruitful and respectful relations and exchanges. First of all, illustrious Cubans have contributed to the social fabric of Minnesota. Cuban scholars have lectured at Minnesota universities. Several Cuban baseball players have played for the MLB Twins, the Minnesota team, including Hall of Famer Tony Oliva.

And of course, the best of Cuban music, culture, has come to you from the prodigious hands of Nachito Herrera. Cubans like Nachito, his wife Aurora, and Ofunshi, also panelists at this event, place the name of Cuba very high in the United States.

Also, Minnesota representatives have visited Cuba seeking business opportunities. We pleasantly remember the visit in 2017 of current US Senator Tina Smith, then Lieutenant Governor, along with state officials and agricultural groups; as well as the visit in 2015, of Saint Paul ´s mayor, Chris Coleman, accompanied by business and civic leaders. Federal congressmen from both parties have backed bills to lift travel restrictions to Cuba for Americans and expand bilateral trade.

Cities such as Saint Paul and Minneapolis have passed resolutions advocating to lift the so called Embargo on Cuba and expanding cooperation in health. This is an intention also expressed by state Senator Sandy Pappas in her letter to Governor Tim Waltz. We believe that the virtual conferences: Understanding COVID-19: Minnesota-Cuba Innovations & Research, taken place December 2020 and April 2021, between leaders in public health, healthcare, and research from the University of Minnesota and Cuba, were good starting points that can help us work toward higher goals.

The Minnesota agricultural community has been part of commercial delegations to Cuba and has supported visits by Cuban Embassy officials to the state, for which we are very grateful. We invite Minnesota´s business sector to participate in the Second Cuba Business Forum 2021 and its first Virtual Fair, from November 29th to December 2nd, to identify opportunities that could benefit Minnesota and Cuba. For the first time this event will include a segment for Cuban citizens living abroad, as an expression of the Cuban government´s  willingness to promote their participation in businesses related to foreign investment.

Despite the last two years´ complex economic situation, Cuba has continued to transform itself based on the goal of building a more just, inclusive, democratic, prosperous and sustainable society.

Part of these changes should facilitate interactions with the US society, including with Cuban Americans. But these are often hampered by the tight US regulatory framework, which is counterproductive and does not reflect the best values ​​of the American society, nor does it serve the US national interest.

Regarding the presentation at the COP 26 Climate Change Summit, in Glasgow, of a documentary made by a Cuban resident in the United Kingdom, on Cuba´s  program tagged as Life Task, I know that many friends in Minnesota have been interested in exploring ways of collaborating on this matter. Cuba's international position on the issue was set by our historical leader  Fidel Castro, when in 1992, nearly 30 years ago, he warned: “An important biological species is at risk of disappearing due to the rapid and progressive liquidation of their natural conditions of life: man.

The Life Task is a broad and ambitious plan of the Cuban State, led by the Ministry of Science, Technology and Environment, approved in April 2017, to face climate change in the national territory, through adaptation and mitigation measures. It is a response to Cuba's national goals and international commitments. It is based on rigorous scientific environmental studies. The main objective is to protect human life and its quality, in conditions of a changing climate. It involves all sectors of the economy and society and is applied at the national and local level. If Minnesota is interested we could share experiences on this matter.

Nothing is more opportune and viable than increasing bilateral cooperation in areas of interest between Minnesota and Cuba, through the exchange of information, good practices and technologies.

In summary, I emphasize my consideration that Cuba-Minnesota relations offer an example of the kind of constructive and mutually beneficial relationship that the US and Cuba could have. We would like to extend an invitation to celebrate a Cuba-Minnesota day at the Cuban Embassy when the epidemiological conditions allow. And at the same time we invite you to visit the Island now that our borders are open again and enjoy the background picture that you have been seeing today during my presentation.