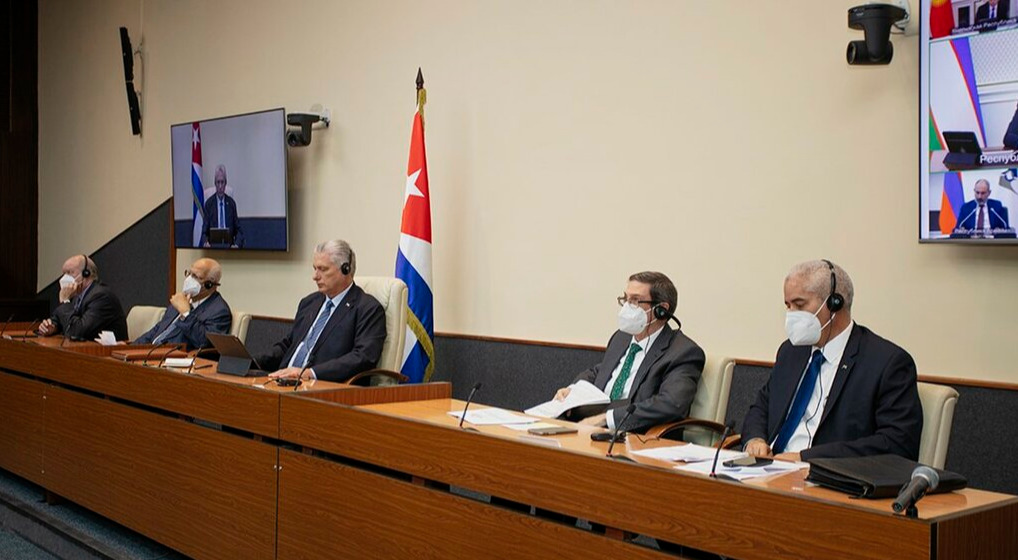 Speech by the First Secretary of the Central Committee of the Communist Party of Cuba and President of the Republic, Miguel Díaz-Canel Bermúdez, at the Supreme Eurasian Economic Council. Palace of the Revolution, Havana, December 10, 2021 -- "Year 63 of the Revolution."

(Shorthand Versions - Presidency of the Republic)

His Excellency Mr. Kassym-Jomart Tokayev, President of the Republic of Kazakhstan;

Your Excellency Nursultan Nazarbayev, Honorary Chairman of the Supreme Council of the Eurasian Economic Union;

Your Excellencies, heads of delegations of the member states of the Supreme Eurasian Economic Council:

I am grateful for Kazakhstan's invitation to participate in this new meeting, which has a special significance for Cuba as it is being held just a few hours before the first anniversary of our incorporation into the Eurasian Economic Union as an Observer State, a status that honors us.

Since then, in close coordination with the structures of the Union and the support of its member states, we have taken steps to advance towards a mutually beneficial relationship based on respect, trust and collaboration.

Since the last exchange last October, we have accompanied activities and virtual meetings with various actors of the Union.

Of particular note are the participation in the last session of the Intergovernmental Commission in Yerevan, Armenia, and the meetings between Heads of Customs on collaboration, exchange of information and mutual assistance within the framework of the Single System of Tariff Preferences of the Eurasian Economic Union.

Exchanges with the Gamaleya Institute and the Russian Investment Fund to carry out studies to combine vaccines from both countries against the virus that causes COVID-19 are encouraging.

This could also be beneficial for the rest of our Eurasian partners, as well as the possibility of producing and supplying Cuban vaccines, based on requests from the Union.

We are honored to have had the presence of representatives from Armenia, Belarus, Kazakhstan and Russia at the recently held II Cuba 2021 Business Forum, which was attended by 2,300 entrepreneurs from 86 countries, 23 chambers of commerce and 41 promotion agencies, and became a meeting space between foreign and domestic entrepreneurs to promote Cuba's exportable offer and business opportunities in the country.

In the next few days, we will receive in Havana the Minister of Integration and Macroeconomics of the Eurasian Economic Commission, Sergey Glaziev, and the Second Session of the Joint Commission will take place.

In this context, we foresee the signing of the Joint Collaboration Plan for the period 2021-2025, which includes more than 30 actions in the economic, commercial, banking-financial, health, biotechnology, agro-industry, culture, sports and communications spheres.

All this will contribute to the strengthening of our inter-business ties and to the alignment between the Strategic Guidelines for the Development of Eurasian Economic Integration until 2025 and the National Economic and Social Development Plan of our country until 2030.

We reiterate the firm will to maintain active participation as an Observer State of the Eurasian Economic Union.

We express our solidarity and support to the sister Republic of Belarus and its President Alexander Lukashenco in the face of unilateral and unjust sanctions and attempts by the West to destabilize his country.

We reiterate our solidarity with President Vladimir Putin in the face of the attempt to extend NATO's aggressive actions to the borders of the Russian Federation, a sister nation to which we express our solidarity.

2021 has been a difficult year for all due to the impact of COVID-19 and the multidimensional crisis it has exacerbated.

Cuba, in addition, suffers the onslaught of the criminal economic, commercial and financial blockade of the United States, opportunistically intensified in times of pandemic, along with a fierce political-communication campaign to try to create chaos and internal destabilization.

I thank you, on behalf of the Cuban people, for the support of your states in confronting the pandemic and our demand for the end of the blockade.

I reaffirm our determination to move forward. Cuba has not stopped, our self-sacrificing people have endured the weight of this true economic war and the enormous limitations it imposes on us.

We have overcome the worst moments of the pandemic thanks to our robust health and science systems and the prowess of our scientists and health personnel.

With our Abdala, Soberana 02 and Soberana Plus vaccines, more than 9.2 million compatriots have completed their vaccination schedules, representing 83% of the total population[1], including pediatric ages.

We aim to immunize our entire population by the end of the year and have begun to provide booster doses.

The sustained results in the control of the pandemic, the opening to tourism since last November 15 and the process of improvement of the state enterprise and the rest of the economic actors, allow us to be today in better conditions for the gradual recovery of the economy and to advance in the joint projects with the Union and its Member States.

We wish success to the next Kyrgyz Presidency and especially to President Sadiv Shaparov.

Cuba continues to be committed to unity, cooperation and joint work. We are convinced that together we are capable of advancing in the integration processes between our countries and that the year 2022 will be fruitful for the realization of common objectives and goals.

On behalf of the Cuban people and Government, I extend to you our warmest congratulations and best wishes for the health and prosperity of your brother nations and peoples.