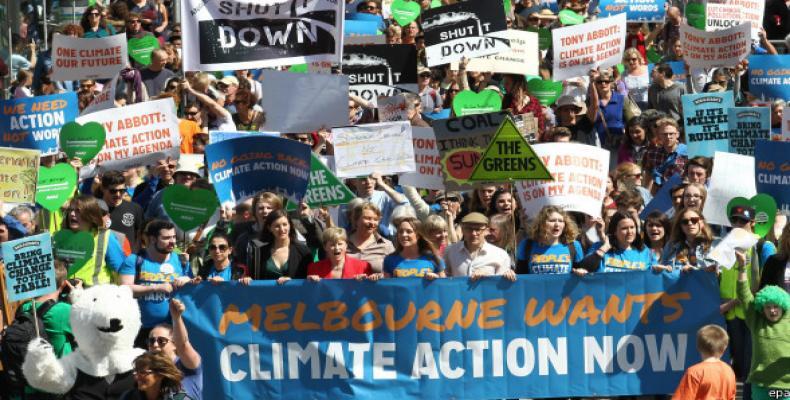 Let's take a look at he first item on the long list of issues to be addressed at the United Nations General Assembly in New York this week: Climate change. On Tuesday President Barack Obama was scheduled address a group of world leaders at the U.N. Climate Summit, a one-day meeting hosted by U.N. Secretary-General Ban Ki-moon and open to leaders of all 193 U.N. member states, though not all will attend, plus members of the private sector. How does the president feel about this?

The event -- Obama's first stop in a busy week at the General Assembly -- offers Obama a chance to shift the conversation away from the threat posed by ISIS, Ebola, and other national security matters and focus on an issue where he can tout what he claims are US accomplishments.

In 2013, Obama unveiled several executive actions aimed at reducing carbon emissions and combating climate change, and at Tuesday's summit, White House officials say, the president will highlight the need for the international community to come up with a plan with the same aim.

Last June, Obama announced a plan to cut carbon pollution, including directing the U.S. Environmental Protection Agency, the EPA, to establish new emission standards for active coal plants, and working with other countries including China and India -- two of the world's top emitters of greenhouse gases -- to establish new plans for addressing pollution globally.

The plan included many executive actions -- things that don't need approval from Congress, such as new standards for coal plants – and they were controversial.

A year later, in June, 2014, the EPA proposed a new plan designed to cut carbon emissions by 30% by the year 2030. That plan has become a popular subject in several Senate races this year, including West Virginia and Kentucky.

"Obama will announce a suite of planned tools that will harness what he sees as the unique scientific and technological capabilities of the United States to help vulnerable populations around the world strengthen their climate resilience," White House Press Secretary Josh Earnest told reporters on Monday.

For the environmental community, the next big frontier to tackle is methane emissions -- different from carbon emissions but just as important in the fight against climate change.

The Sierra Club, one of the US's oldest environmental organizations. John Coequyt, director of the Club’s international climate campaign says "That's one of the biggest unresolved pieces. For us the big next steps include making a decision to address methane pollution from the oil and gas sector."

A demonstration in New York on Sunday featuring appearances from U.N. leader Ban Ki Moon and activist/actor Leonardo DiCaprio, among others, turned out tens of thousands of supporters, but fecent polling indicates that many Americans do not recognize addressing climate change as an issue they believe should be a top priority for the President and Congress.

A Pew research poll conducted earlier this year found that only 29% of respondents listed "dealing with global warming" as a top policy priority -- and that number has remained virtually unchanged since Obama took office in 2009.

And a Gallup poll conducted in March 2014, found that a little under 25% of Americans list climate change as a national problem that they worry about "a great deal."

However, when it comes to addressing climate change, polling indicates most Americans back at least some action. A Gallup poll from June found that 65% of those surveyed support the government tightening pollution regulations on businesses.

The forecast for the next century is Hotter, drier and hungrier, and the chance to turn down the thermostat is slipping away.

That's the latest conclusion from the United Nations, which urged governments to address the "increasingly clear" threats posed by a warming climate before some options are closed off for good. Taking steps to reduce the carbon dioxide emissions blamed for rising temperatures could buy more time to adjust to a warmer world.

We have committed to a certain amount of warming," Kelly Levin, an energy and climate expert at the U.S.-based World Resources Institute has warned..

"Over the next few decades, we are going to lock ourselves into a climate change commitment that is going to paint a very different world, depending on what we choose today," Levin said. "The choices we make today are going to affect the risks we face through the rest of the century."

"Adaptation is emerging as central area in climate change research," Levin said. But adaptation -- steps such as building sea walls, conserving water and designing cities for warmer climates -- has its limits, she said.

The idea that carbon emissions are changing the Earth's climate is politically controversial, but generally accepted as fact by the overwhelming majority of scientists. And as emissions continue to rise, driving up CO2 concentrations in the atmosphere, the impacts will be more severe, more likely and possibly irreversible.

In most cases, climate change will exacerbate existing problems, such as the availability of fresh water in sub-Saharan Africa. Glaciers will continue to shrink almost worldwide, affecting water supplies downstream.

Animals have begun shifting their habitats in response to a warming world, and key crops have been affected already. Colder climates may see increases in crop yields from longer growing seasons and milder temperatures, but the negative effects are expected to outweigh the positive.

The impacts won't be the same for everyone, and as usual, the world's poor are more likely to be hurt.

Climate-related hazards affect poor people's lives directly through impacts on livelihoods, reductions in crop yields or destruction of homes and indirectly through, for example, increased food prices and food insecurity. For those people, the effects "will be catastrophic" unless emissions can be reduced.