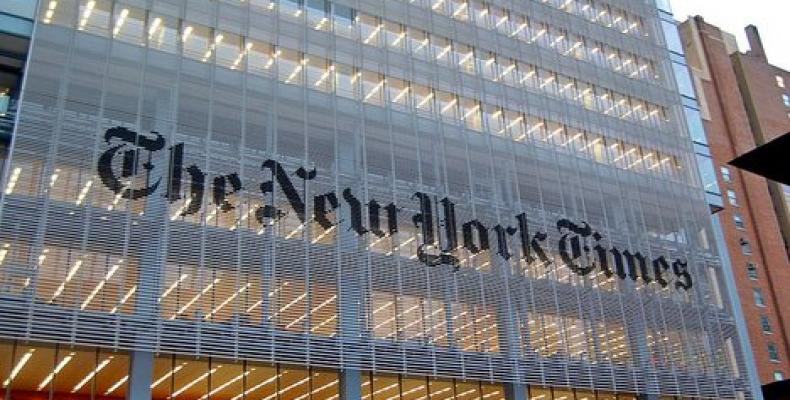 Washington, October 29 (RHC-PL) -- The U.S. and Israel have once more remained alone against the world regarding the blockade against Cuba, according to a new article published in The New York Times on Wednesday.

With the headline: “On Cuba Embargo, It is the U.S. and Israel Against the World -- Again,” journalist Ernesto Londoño expressed the approval of the United Nations General Assembly of a resolution that asks for the end of the economic and financial siege on the Caribbean island.

“Out of the 193 members of the UN, 188 support Cuba. The three abstensions –- The Marshall Islands, Micronesia and Palau -– are not considered 'heavyweights' in political matters,” commented Londoño in the editorial note that appeared in the 'Taking Note' column of the newspaper.

Only Israel (Washington's main ally in the Middle East) took the side of the United States, underlined the text, explaining that this annual vote is well worth paying attention to because it occurs at a time of growing international pressure for the normalization of relations with Cuba.

"The White House is considering what measures it might be able to take in that direction during the time remaining to President (Barack) Obama in office," said the article.

Londoño criticized the position "of a little-known American former ambassador (Ronald Godard)" who on behalf of his country tried to defend the continuation of a policy, which has survived 11 Republican and Democratic administrations.

The article stressed that the Caribbean nation has expressed its willingness to dialogue with the United States and cited fragments of the speech by Cuban Foreign Minister Bruno Rodriquez on the podium of the UN regarding a future approach, based on a respectful relationship.

The influential newspaper, which in recent days has published two editorials on the need to end the blockade and mend the ties between the two countries, called Washington's policy toward Havana “draconian.”

It is ironic that a policy aimed at isolating Cuba has caused the opposite effect, and that the country left alone is the United States, said the newspaper.

The day before, The New York Times also published a report in which it stated that "the General Assembly of the UN voted overwhelmingly for the twenty-third time to condemn a blockade lasting more than five decades and which, according to experts, is the longest in history.