A Letter from a White South African to White Americans 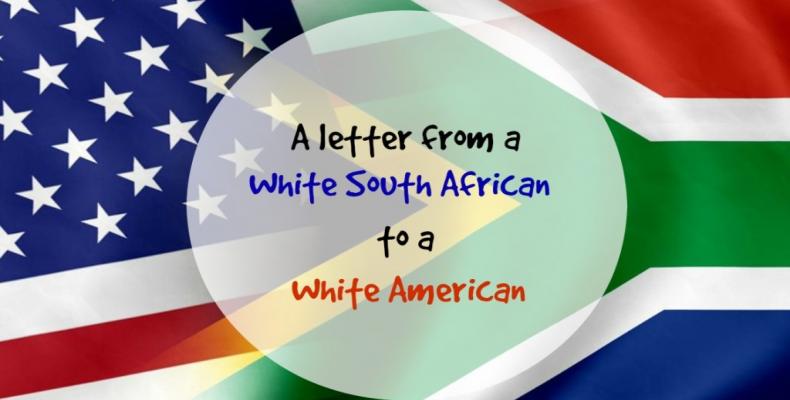 It has been an eerie thing for me these past few years: sort of a déjà vu experience to watch the news and read about Ferguson, Eric Garner, Baltimore riots, McKinney and, most recently, the horrific shooting in Charleston. I’ve been watching #blacklivesmatter trend on Twitter: grief and outrage and opinions from every corner. And, as someone who grew up in Apartheid South Africa, this all feels eerily familiar to me. I listen to people talk and think I remember, and I recognize that.

America did away with legislated racism a few decades before South Africa did (I remember reading many of the early US cases in my constitutional law classes in SA), but institutional racism is still alive and well, and people are hurting.

I recognize the fear, the blaming, the use of “they” and “them” in people’s language. I remember hearing the voices of brave voices in the black community appealing to people to listen, to learn, to please, please acknowledge that there are hurts I don’t see or understand. I remember the talk of white privilege, and feeling unjustly accused by the term. I remember grappling with what it meant to be regarded as an oppressor, even though I was too young to have done any wrong myself.

I know there are many differences between America and South Africa’s histories: they are complex narratives, woven in blood and ink. I do not write this as an expert analyst, or as a political pundit – but as one confessing there is so much I don’t know and understand. But, I offer the little I’ve learned living in a country which shed tears and blood over race, and now living in another doing the same:

That, even though I was raised as a “liberal” white person, I was still a beneficiary of privilege. I still had more opportunities than people with more melanin in their skin, just because of race. I had not yet learned that we are all blind to our own privileges until we hear the stories of those who have lived without. Just as we don’t know what a privilege it is to be able-bodied until we, or someone close to us, loses significant body function, we don’t know what white privilege is until we, or someone close to us, experiences significant discrimination on the basis of their skin color. For example, I didn’t know until recently that even the color of band aids reflected privilege: the “norm” is a skin-tone suited for Caucasians, not people of color.

That, just because I wasn’t a hate-mongering “racist” and even though I had friends of other races (I was one of the few who went to a private, multiracial school in the 80’s), didn’t mean I knew what it was like to be black. I had not yet learned to listen to people’s stories.

That, even though my mom did much to try and teach us not to use racial slurs (for example, black men are not “boys”), there were still other presumptions and prejudices and blindspots I carried because of the culture I was born into.

That, even though I believed in a gospel where “there is no male and female, slave nor free, but we are all one in Christ Jesus” (Galatians 3:28), that there was still a significant need for reconciliation and restoration within the church. The denomination of which I was a part (REACH-SA) held a number of meetings in the mid-nineties, seeking to discuss this very thing: what needed to be done so that predominantly “white” churches” and predominantly “black churches” within the same denomination could have healed and whole relationships with each other. At first, I scoffed at the need for such talks (Why do we need that? Haven’t we all been forgiven by Jesus and so we just forgive each other and move on?), to later on a deep and dawning realization that just offering to have that conversation showed a humility, and offered an olive branch, which had been sorely lacking. As it turned out, we needed to say I’m sorry, even thought I hadn’t realized there was an offense.

To you, beloved Americans, I offer this humble suggestion: please learn something from South Africa’s history in the current crisis. Read Alan Paton’s Cry, The Beloved Country. Read Nelson Mandela’s Long Walk to Freedom. Consider Desmond Tutu’s words and example. Read Michael Cassidy. Read about the Truth and Reconciliation Commission. Listen to what happened (and how the church responded) when a group of terrorists walked into St James Church and massacred the worshipers there in 1993.

Listen to the stories of the white families around you who are adopting black children, and are learning in their own families about how their darker skinned children are treated differently to their white ones (like Jen Hatmaker, Karen Yates, and Kristen Howerton). Listen to the words of writers like Austin Channing, and Osheta, who are seeking to be peacemakers (not trouble causers) by telling the stories we need to hear about race. Acknowledge that if you are white, you have no idea what it’s like to be not-white.

Can I also gently say that you are not going to hear the stories that will move you towards grace and better understanding if you are exclusively watching FOX news. (Or reading Matt Walsh.) South African would never have been able to move forward if we all just kept listening to the people we had always listened to. We need to read and listen outside of our little circles. It was really only when I had finished law school and was at seminary, side by side with South Africans from every race group, and people were sharing their testimonies of growing up that the penny really began to drop for me. I’m still trying to listen. It’s hard. God knows, I want to be a better listener than I’ve been.

I’m a long time fan of Jodi Picoult’s novels: I love the way she weaves together stories about deeply divisive ethical issues, and places characters in her story who represent various viewpoints on those issues. What amazes me about her writing is how, as each chapter skips to a different character, their views make sense to me when told from within their perspective. Her writing has made me realize that everyone says and does things in accordance with their viewpoint, and that differences of opinion are often less about who has the facts, and all about where a person is coming from in viewing the facts.

I’m in my late thirties, and still learning how much my opinions have been shaped by my being white and growing up in the predominantly white communities and schools I did. Watching South Africa go through its painful transition to democracy was the beginning of a lesson in needing to listen well (and silently) to other’s stories. The difference between a freedom fighter and terrorist is really just a matter of perspective, isn’t it?

I write this with tears, prayer, and hopes that we can do better. Listen better. Love better.

Things are not okay the way they are.