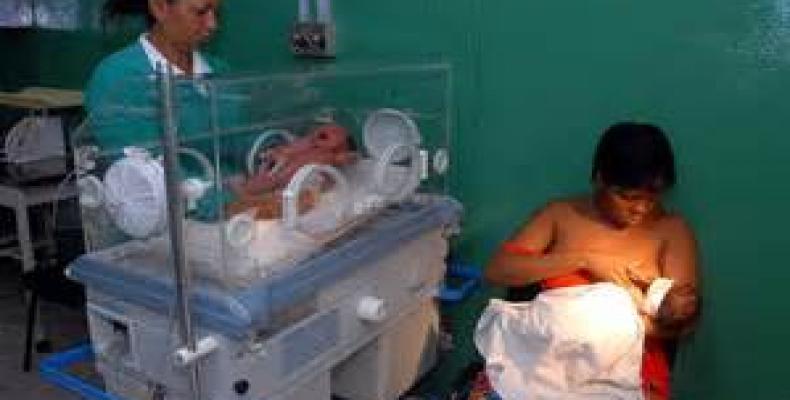 Every year, since 1992, World Breastfeeding Week is celebrated from August 1st to the 7th in more than 120 countries around the world.

Considered the first immunization action to protect the newborn from deadly diseases such as pneumonia, the world campaign to promote exclusive breastfeeding for the first six months of life was launched by the World Health Organization (WHO) and the United Nations Children's Fund (UNICEF) to counteract a sharp decline in breastfeeding reported globally.

Research studies indicate that 20 percent of neonatal deaths could be prevented if newborns were breastfed within the first hour after birth. It reduces the risk of respiratory tract infections, diarrhea, asthma, food allergies, celiac disease, type 1 diabetes and leukemia. As for mothers, long term benefits may include a decreased risk of breast and ovarian cancers, cardiovascular disease, and rheumatoid arthritis and type 2 diabetes.

Over the past several decades, Cuba has promoted breastfeeding, a major component of the mother-child health program. This strategy of the Cuban health care system is supported by the “Working Women’s Maternity Law,” a piece of Cuban legislation that provides paid one-year maternity leave for women after giving birth.

According to Doctor Pablo Roque Peña, coordinator of the National Breastfeeding Program, one out of every two Cuban children under six months of age is breastfed. Ninety percent of babies born in maternity hospitals across the country are breastfed, which attests to growing awareness about the importance of breastfeeding.

The national campaign involves also the ministry of education and Cuban media in this common effort to promote the benefits of the practice.

Given the latest technological advances, the human milk is properly screened and pasteurized, thus eliminating the risks of HIV/AIDS transmission.

No doubt, Cuba takes good care of its newborns. In that sense, it embraces this year's World Breastfeeding Week celebrations, fully aware that breastfeeding fosters the healthy growth and development of new generations of Cubans.