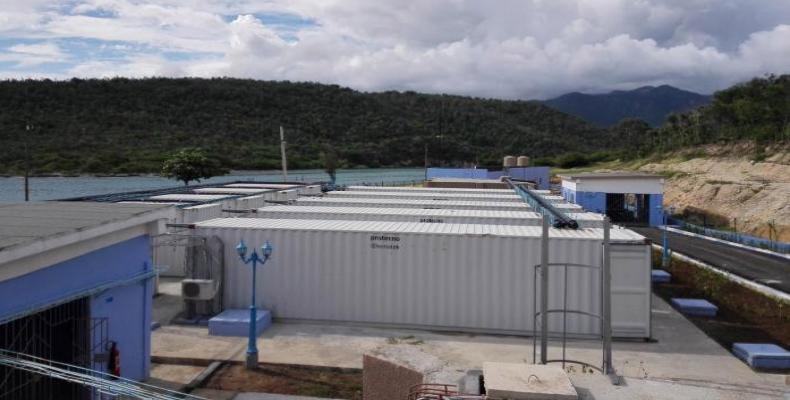 The National Institute of Water Resources (INRH) plans to complete construction of nine desalination plants this year, which will supply drinking water to communities with high levels of salt in their water tables.

According to Fernando Perez Gomez, INRH director of Infrastructure and Investment, the project has financing of over $3.6 million pesos, and will operate with German technology.

Thus far, work is underway on the construction of two in the province of Havana, one in the town of Cojimar, and the other in the area known as La Puntilla, in the municipality of Playa. Pérez pointed out that they are small systems, with a capacity to process two cubic meters of brackish water per hour, for adjacent communities.

In Matanzas, the construction of three facilities of this type is underway.

One, named Giron II, will be ready in October, with a capacity of four cubic meters per hour, to benefit some 3,400 persons, he said.

In the province of Granma, the Papi Lastre and Las Mangas desalination plants, both with a capacity of two cubic meters per hour, are in the foundation phase and will be completed in October this year, while the Lombillo plant - of the same capacity - located in Camagüey is scheduled for completion in July.

Construction of the four-cubic-meter-per-hour facility planned for the Isle of Youth special municipality has yet to begin, but is expected to be completed before the end of 2020.

Pérez reported that the two plants in Santiago de Cuba, El Francés and Bahía Larga, are in the start-up phase. Both will process five cubic meters per hour to directly benefit some 300 people between them.

"Although this number seems small, these plants, which are donations from Spain and Germany, after filling tanks for the communities where the works are located, supply pipelines to other adjacent settlements, so the impact is greater," explained the INRH Infrastructure and Investment director.

Pérez added that, for some years now, the tourism sector has made good use of such facilities, highlighting the existence of plants on Santa María and Coco Keys, with capacities above 180 cubic meters per hour, in salinity conditions higher than those of the coastal areas. Regarding these, Perez noted that a second technological module will be incorporated this year at the Santa Maria Key plant, to increase its capacity to 360 cubic meters of water per hour.

These desalination plants are part of efforts undertaken at a national level to provide points of easy access for the population affected by high levels of salinity in their water supplies. The first such plant in the province of Guantánamo, in operation since October 2019, was in the Punta de Maisí People’s Council, where it supplies some 1,700 residents with drinking water.