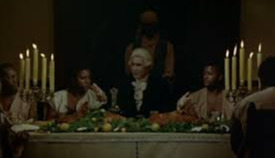 Havana, August 3 (RHC)-- A restored copy of the Cuban film ‘La última cena’ (The Last Supper) (1976), by filmmaker Tomás Gutiérrez Alea, was selected to be screened in the Venice Classics section out of competition of this year’s 78th Venice International Film Festival.

Organized by La Biennale di Venezia, the Festival is officially recognized by the FIAPF (International Federation of Film Producers Association).

Critic and essayist Luciano Castillo announced that the Cuban film will be exhibited at Piccolo Arsenale Theatre. He added that a total of 14 restored films were selected to be screened in the Venice Classics section. ‘The Last Supper’ will be screened on August 18th.

The iconic Cuban film was restored thanks to an agreement between Cinemateca de Cuba, attached to the Cuban Film Institute and the Archives of the Academy of Motion Picture Arts and Sciences in Los Angeles. The restored copy had its world premiere precisely at the Venice International Film Festival in 2019.