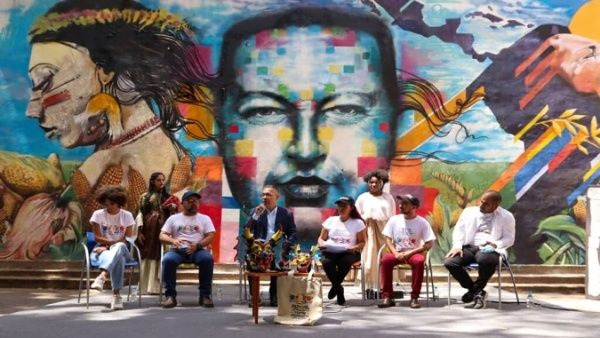 Caracas, August 1 (RHC)-- The First International Progressive Theater Festival began in Caracas, Venezuela, under the motto: "Let humanity be human."  The festival will present 47 shows with theatrical groups from 15 countries through August 7th.

The objective of the event is to spread a message of unity for all the peoples of the world through the arts, freedom of thought and action for life.  On this occasion, there will be a tribute to the German playwright and poet Bertolt Brecht, with the selection of several scenes from his most representative works.

"We wanted to pay tribute to the greatest representative of universal epic theater, since this is the concept of the festival, which is to present a political, conscious, critical, lucid theater for all Venezuelan spectators," said director Jerico Montilla.

The Progressive Theater Festival kicked off with the play "Contra la miseria," staged by the National Theater Company at the Municipal Theater of Caracas.

"It is a dialectical theater, a theater for thinking, for reflection, which presents a denunciation against the capitalist world, wonderfully interpreted by 23 actors on stage," said actor Somar Toro about the play "Contra la miseria."

Venezuela's Minister of Culture, Ernesto Villegas, said that 189 theatrical proposals were presented throughout the country, which exceeded all expectations, and pledged that all these plays will be staged.

The Progressive Festival joins the activities that have been carried out in Venezuela on two important events: the 30 years of the civic-military rebellion of February 4, which gave birth seven years later to the Bolivarian Revolution, and the attempted coup d'état against Commander Hugo Chávez on April 11, 2002.

During these days, culture will send a message of peace to the world and will serve for dialogue in the process of reestablishing bilateral relations between Colombia and Venezuela, which will be restored as from August 7th, when Gustavo Petro assumes the presidency of that country, the special guest of the festival.