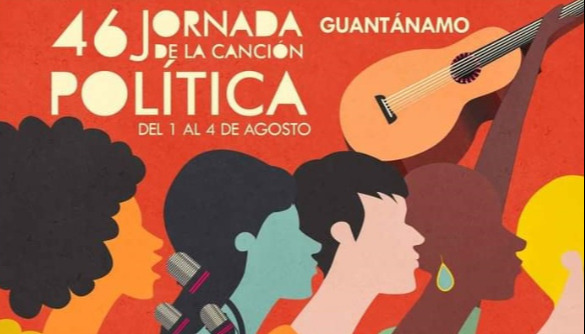 Guantanamo, August 1 (RHC)-- Dedicated to the 50th anniversary of the Nueva Trova Movement in Cuba and to make visible the gender approach in this form of musical creation, the Jornada de la Canción Política in Guantánamo, the oldest event of the Hermanos Saíz Association, with a fraternal exchange between new and veteran generations of singers, begins today and runs until August 5th.

The cultural event will gather, once again, greats of the national musical panorama such as Eduardo Sosa, Augusto Blanca, Pancho Amat, Lorenzo Cisneros (Topete), Noel Nicot, Mario Zamora, Josué Oliva and Polito Ibáñez, who together with the young voices of Maikel Moral, Pedro Antonio Sánchez, the boys of Trovuntivitis, Controvando and other guests will take the stages of the Alto Oriente with the music and poetry of allies.

Four will be the main concerts of the program, which also includes extensions of Rutas azarosas to Baracoa, Niceto Pérez, Yateras, Manuel Tames and Caimanera, where the cultural riches of these areas, including changüí groups and the Stone Zoo, the only one of its kind in the country, will be presented.

Exhibitions, performances and poetry readings will also be part of the program, which includes fixed spaces such as De qué callada manera and Lo que dice mi cantar, where troubadour music will be the central theme.

It is worth mentioning the participation of female voices such as Yaima Orozco, Yeni Turiño, Annalie López and the renowned Marta Campos and Heidi Igualada.

In tune with the current debates on the Family Code, the theoretical section includes a panel on the gender approach in trova with the presence of researchers such as Zenovio Hernández, Yosvel Hernández and Antonio López, who will present the book Convertido en Canción (Converted into Song). On the other hand, from Ediciones La Luz, Norge Luis Labrada will bring volumes of that publishing house from Holguin, among them texts by authors from Guantanamo.

As usual in the Jornada, the concert will be held on August 3 in front of the obelisk of the Martyrs of August 4, when the troubadours will pay tribute to the young people who lost their lives as a result of the explosion in a bomb factory of the 26th of July Movement.

On August 4, a tribute will be paid to Santiago composer Ñico Saquito on the anniversary of his death, while the closing of the Day will be, for the first time, in Holguin, on August 5, with a concert by Pancho Amat and Eduardo Sosa, among others, at the Casa Iberoamericana.

This year the Political Song promises to be awarded for the diversity and quality of the invited voices, which ratifies the value of this event, which in this 46th edition had the support of Artex, the Cuban Fund of Cultural Goods, the Union of Young Communists, Municipal Culture, the Juntarte project and the non-state actors of the economy Bar la Diosa and Downtown, all interested in the return of the song to Guantanamo after two years of celebration in the virtual space, due to the pandemic.