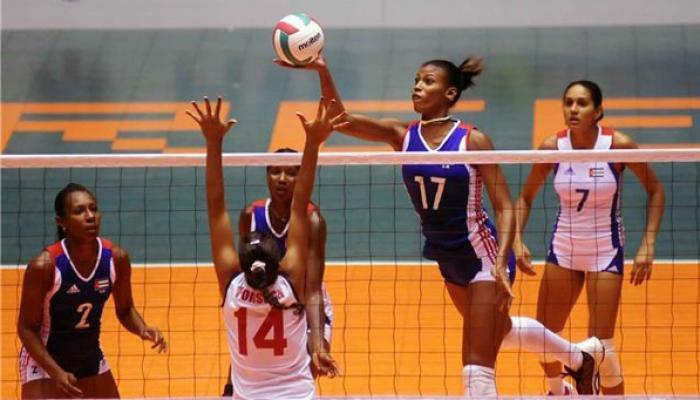 SPORTS NEWS for THURSDAY, MAY 11th

The Cuban female volleyball team, under 20, has finished the qualifying phase of the IV Pan American Cup undefeated. The games were held at the San José National Gymnasium in Costa Rica.

The Cubans, who debuted on Monday with a three-set win against Chile, needed four times to defeat the Peruvian squad in 59 minutes of fantastic game.

Heidi Casanova with 25 points commanded the Cuban offensive, escorted by Ailama Cese and Diaris de la Caridad, both with 17 units.

Cuba, bronze in the first edition of these Cups in 2011, led Group C with two wins without defeats, and now will have to wait for the winners of the other two pools, A and B, to know if it advances directly to the Semi-finals on Friday, or if they have to play on Thursday in the quarterfinals.

A statement from that sporting entity specifies that the Cuban coach will direct the Venezuelans squad that will participate this year in the Pan American Cup and the Grand Prix.

Chamber previously served as an assistant coach for the men's volleyball team.

"I did not expect it, it took me by surprise because I was working with the men's team that this year will have to play the 2017 World League. I'm already concentrating to start working with all the athletes," he said.

The Cuban arrived in the country in 2012 with the Mission Barrio Adentro Deportivo of the Cuba-Venezuela Agreement and between June 16 and 25 will be in charge of the selection that will represent the country in the Pan American Cup to be played in Peru.

Also the coach will have a serious test when guiding the Venezuelans in Cameroon, where they will play for the first time the Grand Prix, maximum event of the International Volleyball Federation.

Former high jumper Javier Sotomayor a legend of Cuban athletics, told EFE to be against the proposal of the European Athletics Association to erase all world records prior to 2005 for suspected doping.

"I feel a bit bad like many athletes, it's like erasing the history of what has been done and forgetting world records and even the Hall of Fame," Javier Sotomayor told Efe in a telephone interview.

Sotomayor, 49, known as the 'Prince of Heights', retired from active sport in 2001 and accumulated three world records in his career.

The European Association's proposal is that only a record will be recognized if it was achieved in a duly endorsed international competition, if the athlete underwent anti-doping controls in previous months and if the sample was kept for 10 years for further checks.

The final decision on the proposal will be announced when the International Athletics Federation council meets prior to the London World Championships scheduled for August 3-13.

For Sotomayor, considered the greatest jumper of all time, approving the annulment would mean questioning the work of so many athletes, coaches and athletics executives in the world.