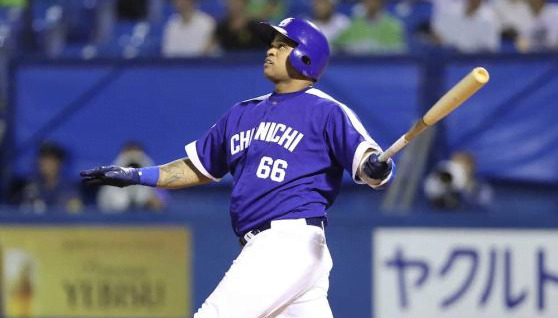 Tokyo, May 27 (RHC)-- Cuban Dayan Viciedo was the protagonist in the duel between Chunichi Dragons and Softbank Falcons, the two Japanese professional baseball organizations with more players from the Caribbean island in their ranks.

The Chunichi fourth baseman hit a run-scoring single in his team's tight 4-3 victory, where the presence of the rest of his compatriots was missed in both teams, most of whom recently traveled to the United States to participate in the Pre-Olympic Games of the Americas.

Viciedo shares a uniform with pitchers Yariel Rodriguez and Raidel Martinez, who flew out on Monday to join the Cuban squad, while his other teammate, catcher Ariel Martinez, did not join the team due to injury.

From the reigning champions Softbank, meanwhile, left for the tournament in Florida the slugger Alfredo Despaigne and the closers Liván Moinel and Andy Rodríguez, although the latter is still in the second squad of the Fukuoka team with a view to moving up to the highest level.

Also in that franchise is Yurisbel Gracial, another player who missed the opportunity to attend the qualifying tournament for the Olympic Games next summer due to an injury.

All these players are playing in the Japanese Professional League (NPB) under contract with the Cuban Baseball Federation, which allowed them to join the Caribbean team, a different situation from that of Viciedo and Leonys Martin, the other Cuban wanted for the four-letter team.

Precisely, the current NPB home run leader also left with an RBI on Wednesday, although he could not prevent his Lotte Marinos from losing 1-2 to the Hanshin Tigers.

Another Latino who stood out today was the Dominican Ronny Rodriguez with his first home run in Japan, but his effort was insufficient to prevent the Nippon Ham Fighters from losing 4-3 to the Yakult Swallows.

As Japan's strong Japanese league is nearing 50 games for each of its 12 franchises, the Hanshin Tigers lead the Central League with 29 hits and 13 losses, escorted by the Yomuiri Giants (25-16).

Meanwhile, the Pacific League keeps the Softbank Falcons on top at 19-7, closely followed by the Rakuten Eagles (19-8).