Another draw and no birthday present for Carlsen 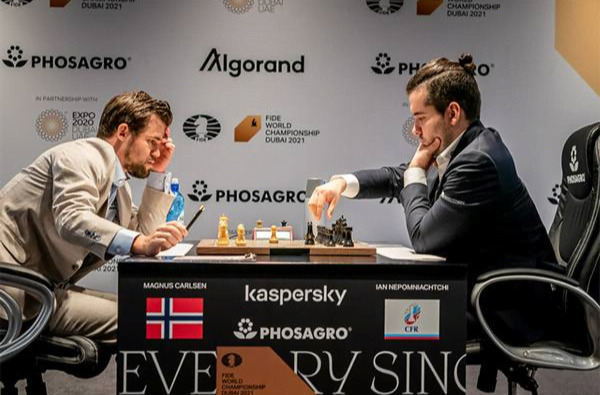 Another draw and no birthday present for Carlsen

Havana, December 1 (RHC)-- Not even driving white figures allowed the Norwegian Magnus Carlsen to give himself a triumph on his 31st birthday, so the draw continues in the World Chess Championship, organized as part of the Dubai International Expo.

The Nordic player chose for this fourth game the King Pawn as his first move and tried to "provoke" the Russian Ian Nepomniachtchi, but no luck.

The challenger had already chosen before the Petrov defense taught now and the result was a draw in less than three hours and only 33 moves.

Carlsen chose a novelty for move 18, in a game variation that has been analyzed from all sides and his opponent's answer did not take long... perhaps because he was expecting it and had already made the study with his team.

The truth is that without being totally boring, Tuesday's game did not arouse great emotions and the followers of the match are already beginning to worry about the desire to witness "fire" on the board.

Some already comment on the two previous duels for the crown, against the Russian Sergey Karjakin in 2016 and the American Fabiano Caruana in 2018, both concluded without victories in the classical games.

The definition then came in the rapid and that does not entirely satisfy those who follow this sport.

On the other hand it is commented - and rightly so - that Nepomniachtchi will be a more dangerous opponent for the rapid and perhaps the defending champion will not be happy to get there.

Nothing that in the Dubai World Championship the fight to the death is still absent and not even Carlsen's birthday was enough for him to celebrate with a victory.

While that was happening in the capital of the United Arab Emirates, another piece of news related to elite chess was making the rounds of the major online news sites, as Iranian (now under the French flag) Aliereza Firouzja became the youngest member of the 2,800 Elo points club.

In the update of the world ranking that will be in force throughout December, Firouzja appeared with 2,803 units, for the first time above the astronomical figure, and he does so at the age of 18 years and six months.

He broke Carlsen's record, who on November 1, 2009 surpassed that accumulation, but achieved it just 29 days before his 19th birthday.

That relationship is of course headed by Carlsen who in August 2019 exhibited 2 thousand 889 and at the moment shows 2 thousand 856.