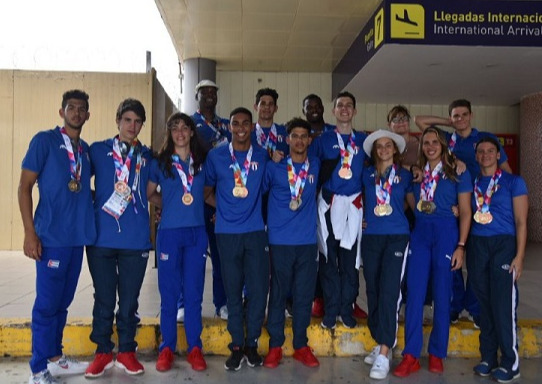 Most of the athletes are already on Cuban soil. A second group will return
in the early hours of the morning. Photo: Omara García Mederos

Havana, July 4 (RHC)-- The Cuban delegation that competed in the First Caribbean Games Guadalupe 2022, returned to the homeland on Monday after their outstanding performance in an event in which they dominated the medal count with 21 gold medals, 16 silver medals and an equal number of bronze medals.

Most of the athletes arrived at Terminal 3 of Havana's José Martí International Airport, including those from swimming, cycling, athletics and the men's futsal team, the latter winning the 21st gold medal.

Osvaldo Vento, president of the National Institute of Sports, Physical Education and Recreation (Inder), and Roberto León Richards, president of the Cuban Olympic Committee, also arrived in Havana, while a second, smaller group will return to the country in the early hours of the morning.

The Deputy Prime Minister of the Republic, Jorge Luis Perdomo, and the first vice-president of Inder, Raúl Fornés, went to receive the athletes. Both congratulated them for their great performance in this regional competition.

In the Caribbean nation's harvest, the contribution of swimming stood out, with nine titles, in addition to judo (5), athletics (4), cycling (2) and the one won by the indoor soccer players.

Among the swimmers, Andrea Becali (in the photo), with four crowns, two silver medals and an equal number of bronze medals, was one of the sensations of the First Caribbean Games in Guadeloupe, as was Rodolfo Falcón (Jr), who won two gold medals and a bronze medal.

Cuba attended the event with 58 athletes in six of the seven sports called by the organizers.