Decathlonist Sanchez satisfied in the Under-20 World Athletics Championships 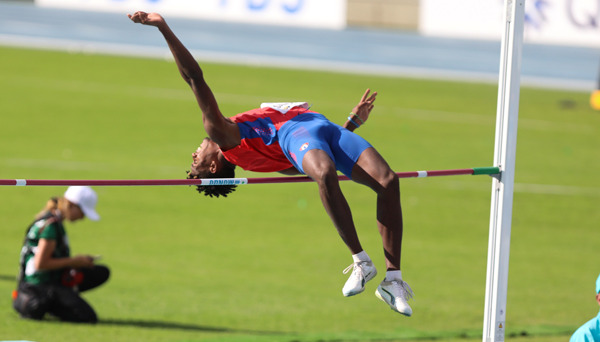 Cali, August 2 (JIT) - A personal best of 1.96 meters in the high jump was achieved on Monday afternoon by Cuban Josmi Sanchez, enrolled in the decathlon at the World U-20 Athletics Championships in Cali 2022.

The 18-year-old Cuban came to this city full of desires and ready to face his international debut, regardless of the rank of other contestants.

This is what he has accomplished so far at the Pascual Guerrero Olympic Stadium, where he also improved his previous mark in the long jump (7.07 meters).

"And it's not over here, expect more," said the boy after the five initial events, which for the moment left him with 3,818 points in 14th place among the 27 registered in the most demanding event of the program.

"It has been an excellent day, from my second event onwards (long jump) everything has been very good. Perhaps with the 100 meters I am less satisfied," he added in an aside with JIT in which he was encouraged to face Tuesday's 110 meters hurdles, pole vault, javelin, discus and 1,500 meters.

At the moment, Gabriel Emmanuel from the Netherlands leads the competition with 4,276 points, closely followed by Sweden's Jakob Thelander (4,192) and Canada's Nate Paris (4,145).

In the morning session, Letsie Tebogo from Botswana set a competition record of 10 seconds in one of the heats of the men's 100 meters.

This Tuesday, another great moment is expected with this 19-year-old young man, who just 15 days ago set a world record of 9.94 seconds at the World Athletics Championships in Eugene 2022, and who is a strong favorite to win the title he already won at the Nairobi 2021 edition.

In the hectometer semifinals, the Cubans will be following Reynaldo Espinosa, who advanced with a time of 10.41 seconds in the heats and aims to be included in the final.

Another who wants to leave his name engraved in this Colombian city is the long jumper Alejandro Parada, who took his personal best to 7.95 meters to be included among the 12 men who will seek the crown on Tuesday.

The Cuban representation in the second day of this universal competition will be completed with the debut of Liliet Cabrera, who will run in the women's 400 meters hurdles heats.