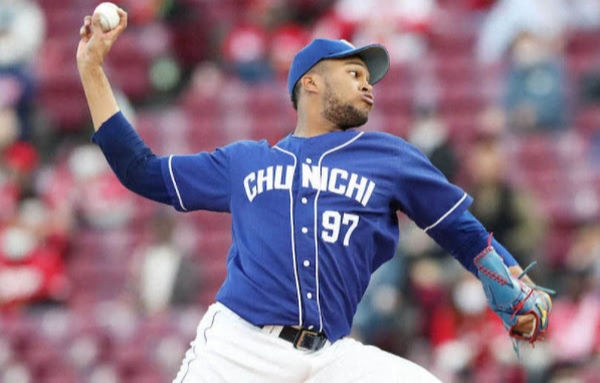 Havana, September 23 (ACN) - Cuban Raidel Martinez scored his 36th save of the season on Thursday by pitching one inning of relief without allowing any hits or runs in the Chunichi Dragons' 3-0 win over the Yakult Swallows in Japanese baseball.

At the Meiji Jingu Stadium in Tokyo, the lanky and fast right-hander from Pinar del Río again equaled the second place of games saved in the Central League, and reduced his effectiveness to 1.03 clean runs.

Raidel's performance is bordering on the limits of excellence, because to these 36 saves are added four victories, a balance that enrolls him in 40 of the only 61 wins of the Dragons so far this season, which has 10 games left to finish the qualifying phase.

The right-hander's club is almost eliminated from the postseason, because with a dismal 61 wins and 72 losses, it is in sixth and last place in the standings, 11 games behind Yakult.

But they are still alive, because in Japanese professional baseball, the leader of each league -Central or Pacific- moves directly to the playoff for the leadership of that zone against the winner of a three-way play-off between second and third place. And the Dragons are separated by four games from the third place occupied by the Yomiuri Giants (66-9-3), who have three games in hand.

Regarding today's duel, the Japanese baseball website reflects that for Chunichi, Camagüey right-hander Yariel Rodríguez pitched a perfect episode of relief and added a strikeout to his personal tally, to improve his effectiveness to 1.24.

Likewise, and also for the Dragons, outfielder Ariel Martínez hit a single in three innings and towed a run, to raise his average to 274, while starter Dayán Viciedo from Villaclare went 4-1, with one hit and one run scored, to lower his average to 291.