Arlenis Sierra is still among the world's great road racers 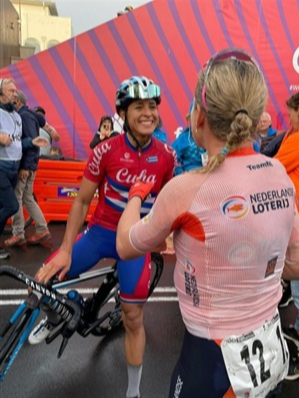 Arlenis Sierra is still among the world's great road racers

Havana, September 24 (RHC)-- Cuban Arlenis Sierra confirmed her place among the greats of world cycling. This Saturday she came sixth in the sensational sprint of the road race of the Road World Championship of Wollongong 2022, in Australia, run over 164.3 kilometers.

The victory, with a time of 4:24.25 hours, went to her Movistar teammate, 39-year-old Dutchwoman Annemiek van Vleuten.

The European rider put in an impressive performance, despite her recent right elbow fracture. She took her fourth world podium, two in the time trial, and her 98th victory in elite races.

She was escorted on the podium by Belgian Lotte Kopecky and Italian Silvia Persico, who crossed the finish line one second behind the champion, the same difference for the other nine riders who competed in the emotional finish on a short and uncomfortable slope.

Arlenis was again very close to the podium. In 2021, in Belgium, she had finished fifth. Placing for the second consecutive year among the serious medal contenders until the last pedal stroke is an unprecedented performance, even for many stars of this event. Needless to say, the Manzanillo rider was once again the best in America.

Not even the Australian squad itself, with full knowledge of the section, marked by an initial eight-kilometer hill plus other steep slopes, could do better than the lone Cuban. The locals had to settle for 15th and 21st places for their two best riders of the day.

Even so, Sierra is not satisfied. With the growth in each season, it is logical that the Pan American queen, when she is not a teammate, aspires to a medal. We already know that she rubs shoulders with the most illustrious stars.

Of the 129 registered this Saturday, 75 withstood the rigors of the race. This sport is not just about pedaling hard. Annemiek's triumph is an example. She saved her strength while staying in the lead, with the task of working for another exceptional rider, Marianne Vos, because she was not the favorite due to her injury. She suffered a lot, especially on the major climb on Monte Keira, 130 km from the finishing line.

In the end, when the attacks followed one after the other as the finish line approached, she led the group of eight that connected with the last five that had dangerously escaped. With about 800 meters to go before the sprint, she was the only one left for her team. She then attacked up the hill, her favorite terrain, and even stood on cranks despite her damaged elbow. She surprised, because none of them came out to catch her. She imposed her strategy.

Arlenis told JIT that "I would have liked a better result, I couldn't and I don't want to justify anything. I gave everything I had, I had a bit of a cool mind, but when I jumped it was not the right moment. I thought I would win a medal, but it just wasn't possible and I saw it so close. It wasn't a fight, I just lacked a bit more of a cool mind."

"The course was definitely tougher than last year's in Belgium, with much more elevation gain. Those last two laps with the downpour made me nervous, I was a little afraid of the downhill, the wet asphalt, but little by little I got over it," she added.

"I thank God for the result, he made me suffer, but he gave me strength to endure that pain... To see something so close, to know that I had the strength, and that only at the end something failed me," she lamented.

"Let's see next year," she said, convinced that the pitcher goes to the fountain until it breaks. She said that three races with Movistar await her on her return to Europe before returning to her beloved island.

During the exhausting race, in which Sierra never stopped being in the main peloton very well positioned, there were several attacks and breakaways, but all were neutralized. The first was by French rider Gladys Verhulst just 16 km from the start.

There were also crashes, but few if we take into account that the rain endangered the day due to the slippery descents and constant curves faced by the peloton, in which 40 riders made their World Cup debut.

The route of the event seemed heavenly, with much of it close to the coast of Wollongong, in the southeast of Australia, in the state of New South Wales.