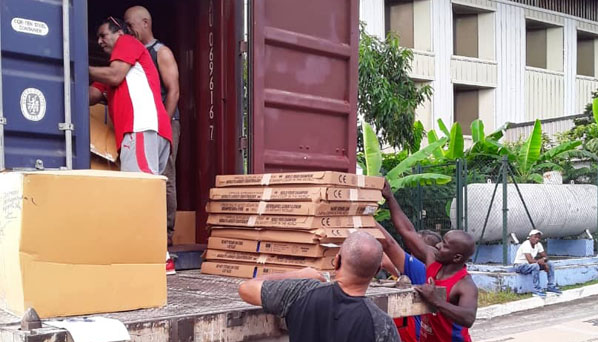 Havana, September 26 (JIT) - An important donation has been received by our country from the North, Central American and Caribbean Volleyball Confederation (Norceca) for the development of this sport at the grassroots level and the preparation of elite teams.

This is a recognition of the new results of the country and that undoubtedly identifies volleyball in the region. It also obeys Cuba's perennial willingness to organize international events and is part of Norceca's actions to support national federations.

Part of the shipment will have its premiere at the Havana 2022 Men's Under-21 Volleyball Pan American Cup, which will take place at the Ciudad Deportiva Coliseum from October 3 to 8.

In addition to two synthetic surfaces of the Sport Court brand -each worth US$350,000-, the contribution includes 500 balls, antennas, nets and ball carts, among other equipment required in this discipline.

"Of these resources, one part is destined to work with the national teams, which are so lacking for the athletes to raise their level," Ariel Sainz, vice president of Inder and head of the Cuban Volleyball Federation (FCV), told JIT.

"The other will be distributed among the 15 provinces and the special municipality of Isla de la Juventud, since grassroots development is a priority for our Federation and we are working on that endeavor," he said.

He added that the synthetic grounds will allow us to improve training at the National Volleyball School and at the same time organize tournaments in the country with higher quality.

"The donation allows us to inject into the national sports system a group of resources that have been in deficit in the country for some years," Sainz pointed out.

"From the new vision of the FCV, due to the changes and transformations of the sport worldwide, the strategy foresees to exploit all the possibilities offered by the different international collaboration projects established by Norceca and the International Volleyball Federation (FIVB)," he said.

"We just attended the FIVB congress. We made coordinations to be included in the empowerment plan with the objective of training and acquiring new technology. For next February we are planning a second container that will allow us to continue covering needs. The presence of FCV members in different international positions allows us to manage and solve these material deficiencies first hand," he said.

Sainz reiterated that as part of the volleyball development strategy in Cuba "we are engaged in the training of our technicians and specialists. As we have announced, three coaches will soon participate in a first level course in the Dominican Republic.

He announced that as a result of negotiations with the Volleyball Development Center in Santo Domingo, an apprenticeship course will be offered in February 2023 at the same level for 30 Cuban coaches under 30 years of age, which will allow them to be categorized and guarantee the development of the reserve.

"It will be the previous step to go through levels two and three, and thus turn Cuba into a fully literate country from the technical point of view, in tune with the current requirements of the FIVB. Along with the results obtained by the teams, FCV is also working to consolidate and solve the material problems," he concluded.