Cuba comes in 12th place in U-16 Chess Olympiad 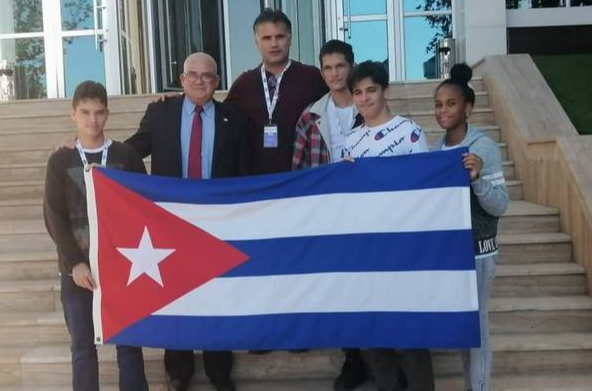 Havana, October 10 (RHC)-- Although it did not have the best of farewells, the Cuban team will return home with the satisfaction of placing 12th -the best in America- at the Nakhchivan 2022 World U-16 Chess Olympiad, in Azerbaijan.

Havana, October 10 (RHC)-- Although it did not have the best of farewells, the Cuban team will return home with the satisfaction of placing 12th -the best in America- at the Nakhchivan 2022 World U-16 Chess Olympiad, in Azerbaijan.

For its four members it was their first major international event, in which they had to face the nine rounds without rest. The final balance of five matches won and four lost seems positive.

Unfortunately, they could not close with a victory and the 1-3 setback against Uzbekistan 1 left them with an accumulated 10 units and out of the top 10 teams.

On Monday, on the first board, Daniel Hidalgo achieved a draw against Mukhiddin Madaminov, a young man with more than 2,400 Elo points. Meanwhile, on the second table, Leduard Gonzalez also split the point with Almas Rakhmatullaev.

The definition came on tables three and four, as Jose Alejandro Izquierdo gave in to Mukhammadzokhid Suyarov and Greter Caballero also failed against the thrust of Umida Omonova.

On the boards, the best performance was achieved by Daniel, who from his leading position accumulated five units in nine games. The rest of his teammates also made very even contributions.

Leduard and Greter accumulated 4.5 points in nine games and Jose Alejandro returned with four points to his account.

Cuba participated in the tournament thanks to an invitation from the International Chess Federation (FIDE), so it could not register any substitute, unlike the rest of the teams. Under these conditions it was impossible for him to propose a strategy of rotations and rests.

"In general we are happy with the attitude, the experience, the possibility of playing and how they approached each round," coach Rodney Perez told the JIT publication from the headquarters, who has the feeling that they could have finished in a better place.

"Half a point more in the tiebreaker would have left us in the top 10, but that's the Swiss System. I reiterate that in general everyone gave their best", he assured together with the Cuban ambassador in that nation, Carlos Valdés, who accompanied them on this last day.

The most important result was to confirm that there is a generation of young people on the island with the talent to compete at the highest level in these categories, and that with more opportunities for exposure they can achieve better results.

One day before the closing of the Olympiad, the champion team was Turkey Red, capable of sweeping all its matches and scoring 18 points. In their final presentation they subdued the Indian team. Uzbekistan 1 won the silver medal with 15 stripes and Azerbaijan 1 the bronze medal with 13.