Protests Against Brazil's Coup Government Hit 40 Cities across the Country 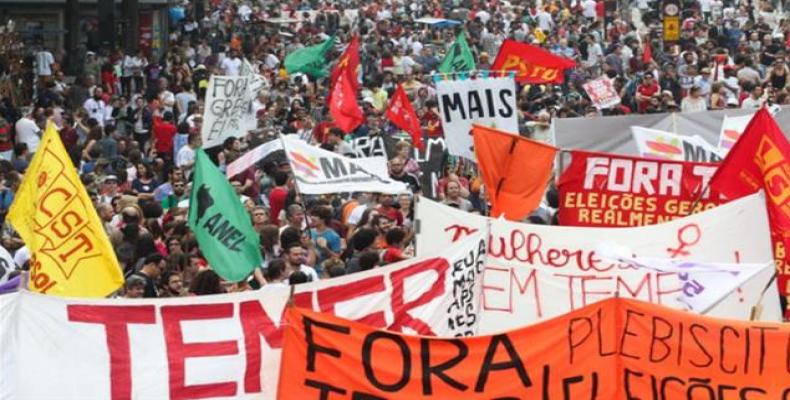 Brasilia, September 12 (RHC)-- Tens of thousands have taken to the streets across Brazil to condemn the ouster of former president Dilma Rousseff and demand the resignation of her successor, Michell Temer.

Hundreds of protesters rallied in Rousseff's hometown of Porto Alegre on Sunday, holing banners and chanting "Temer Out."  Police blocked the street of the town and attempted to disperse the protesters.

A similar demonstration was held in Sao Paulo by thousands of people who gathered outside the city's Art Museum.  They held numerous anti-Temer placards and banners and called for new elections.

Rallies were held at around 40 other cities across the country on Sunday.  In addition to condemning Roussefff's impeachment, the protesters denounced labor, pension and social security reforms taken by the new government.

Temer, who was Rousseff's vice president, replaced her after the upper chamber of parliament voted to suspend her and began an impeachment trial against her in May. When the senate permanently removed Rousseff from office late last month, Temer took over as president.

Temer is about to remain in office for what it would have been the rest of Rousseff's second term through 2018.

She has strongly rejected the allegations, calling the impeachment a coup d'tat and denouncing Temer as a "usurper."