Tens of Thousands March in Chile Against Dictatorship-Era Pension System 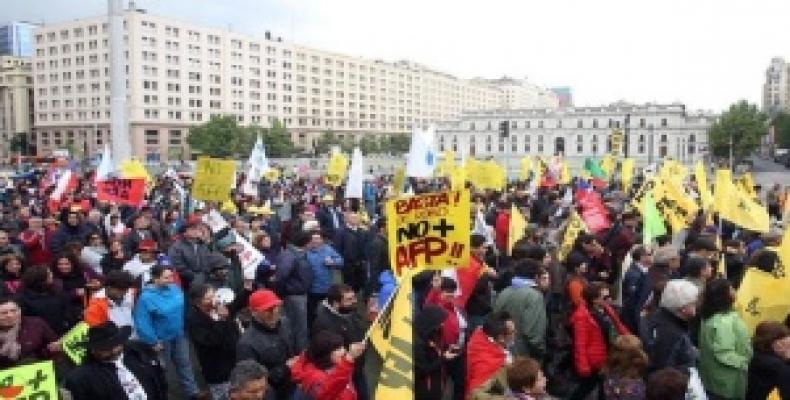 Santiago de Chile, October 17 (RHC)-- Tens of thousands of Chileans in dozens of cities throughout the country took part Sunday in the third day-of-action to demand the end of the private pension system, imposed on workers in 1981 during the Augusto Pinochet dictatorship.

More than 70,000 people marched in the capital of Santiago alone, despite heavy rains.  Luis Mesina, a spokesperson for the organizers, said that the demonstration was "an expression that Chile has definitely awakened and will not stop until we are finished with pension system."

Sunday's rallies and marches were the third time Chileans took to the streets to demand an end the system that forces workers to deposit a portion of their wages, plus an administrative fee, into accounts managed by private funds, which are supposed to be reinvested in the economy.

The pension funds, which vary according to market conditions, have suffered a hit with the recent slowdown in the Chilean economy.  Many workers ultimately retire with a pension that pays less than the minimum wage.

Chile's President Michelle Bachelet previously announced that her administration would work on a reform but organizers of Sunday's protest are frustrated with the lack of progress from the government on the issue.  Earlier this year, the Bachelet government abandoned its proposal to create a state-backed public pension system.

In a speech to the crowd in Santiago, Medina said those two providers had engaged in tax evasion to the tune of $420 million.  The deficiencies of the system came to a head when news emerged earlier this year that Myriam Olate, an official with the country's police forces and the ex-wife of the head of the lower house of Congress, was receiving an exorbitant pension, in dramatic contrast to the pensions of average workers.

Olate was receiving a monthly pension of approximately $8,450 a month, while most retired workers receive an average of just $300 a month.

Chile's pension system was imposed on the country by the Pinochet dictatorship.  It was promoted by the so-called Chicago Boys -- economists trained in the United States who implemented Chile's neo-liberal economic model during the military government from 1973 to 1990.

Critics of the system say it should not considered a social security system, but rather a forced savings scheme.

The next demonstration against the private pension system will take on November 4th.  Organizers have called for national strike on that date.