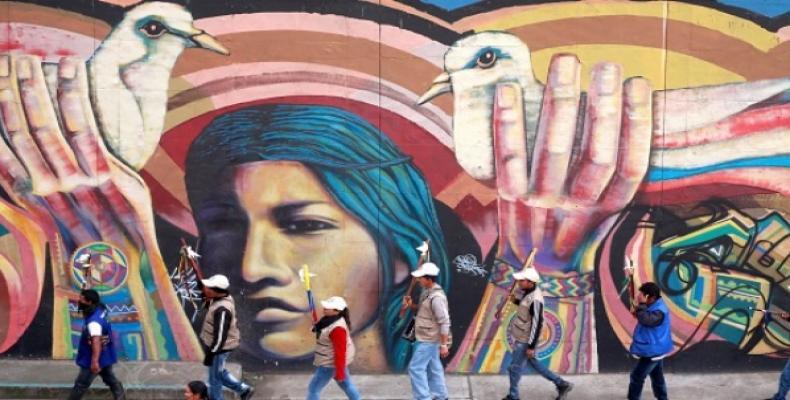 Quito, February 8 (RHC)-- The government of Colombia and the National Liberation Army, the ELN, officially began the public phase of the peace dialogue in Cashapamba, Ecuador on Tuesday.  About 50 delegates from both sides were present at the inaugural act, as well as national and international media.

The talks will cover six major points already agreed upon in preliminary negotiations: the participation of civil society in the peace-building process; democracy for peace; transformation for peace; the rights of victims; ending the conflict; and implementation of the agreements.

Ivan Cepeda, Colombian senator said this round of negotiations will discuss actions that will lead to a bilateral cease-fire and will deal with society’s participation in the peace process. “This is the heart of the negotiations,” said Cepeda. “To open doors so society can participate.”

Brazil, Chile, Cuba, Ecuador, Norway and Venezuela will be guarantor countries during the process.  The talks were initially scheduled to begin last October, but President Juan Manuel Santos unilaterally canceled the meeting just hours before it was set to begin.  The first phase of the talks, which paved the way for the negotiations, was private and informal and began more than three years ago.

Ecuadorean President Rafael Correa has said his country will host the talks and play the same role as Cuba did for the talks between the government and the Revolutionary Armed Forces of Colombia.

Colombia’s five-decade armed conflict has claimed some 260,000 lives and displaced at least seven million people.  Estimates suggest that right-wing paramilitary groups are responsible for up to 80 percent of the violence and human rights abuses that took place during the 52 years of conflict.